I Faltered But That's OK

By Heather Iacobacci-Miller September 29, 2011
I Faltered
I thought today might be a rest day. Usually the day after I do legs ends up being a rest day, very rarely a run. But, I didn't overdo it yesterday. And I was itching to wear my new running shoes. Jason was supposed to do a 6-mile tempo run. Soooo, I packed my bag "just in case."

Honestly, I thought maybe once I got to work and had been sitting all morning that my legs would start to revolt against me. But they didn't, well, not completely. They're tired, but I can indeed hover over the toilets today.

Jason said he was going to do his run at lunch, so I could tag along. We never run together anymore. I actually was a little nervous. Weird right? Of course, he was supposed to be doing 1 mile warmup, 4 miles at 8:40 then 1 mile cool down. So, I was worried about the 4 miles fast.

And, when being honest with myself, I knew I didn't need to go out for a fast run period. This is supposed to be a back off week. Meaning, ease up stupid. Don't be running a 6-mile tempo run the day after legs. AND, don't get it in your head you can do all this when it's in the mid-80's.

Yep, our temps have jumped right back up (end of run was 90 degrees). Oh, and when you decide to do this to yourself, make sure the route does indeed have shade. Not a barren stretch of no-man's land with not a tree in sight for relief. Not even a measly bush to hide under...but I digress.

The first mile was a slow pace, just as a warm up. No biggy. I chit-chatted (probably too much for Jason's liking). Then we picked up the speed. I quickly shut up. The sun was beating down, no relief even from a nice breeze. It was getting hotter by the minute. I made it a mile at the 8:40 pace then I just couldn't hang any longer and had to slow my pace. My breathing was all out of whack, it felt like someone was clawing at my lungs, and my heart rate hovering in the 177 range, I was just falling apart physically and mentally.

I kept pushing on, but everything about the run was just going downhill quickly for me. I finally spotted some shade and took a short walk break to try to recollect myself. I ran for a bit then had to walk again. Jason was still going, but about to make his turn around, so I went ahead and turned around myself.

I will admit to being pissed at myself. I was being really harsh with myself about how slow I was, how bad I sucked, how shitty I was going to do on the half marathon. You name an ugly thought, and I probably thought it. But I knew I had to stop. Period. Just stop.

So I did. Then I started again with a new focus. I started off with a slower pace then gradually increased. I definitely wasn't pushing the 8:40, but was not in my comfort zone by any means either. But, the second half was so much better. I had refocused and gotten myself back under control. My breathing was back on track, my rhythm was back on track. I was still hot as hell and pissed off at the sun, but I was back on track mentally. No more falling apart.

In the end, I managed 5.6 miles with just under a 9-min mile pace (not too bad considering some of the walking I did). So, I walked. I faltered. I wanted to throw in the towel (hell I wanted a towel to wipe off with then throw). But this is what running is about. You dig deep, find out what you're made of - how alive you really are. Sometimes you surprise yourself a little bit.

Another Easy Dinner
Since I ran at lunch, that meant I had to stay later at work. This translates to me not going to the grocery store basically. But, I had a few ideas for dinner using up the last of the fresh veggies (zucchini, squash, new potatoes) on hand.

I decided to just roast all the veggies. I seasoned them with salt, pepper, parsley, and garlic and sprinkled with nutritional yeast flakes at the end. Since the oven was already on, I very briefly baked the seitan cutlets just to add some color. I went with some leftover Garlicky Tomato "Cream" Sauce for the cutlets. 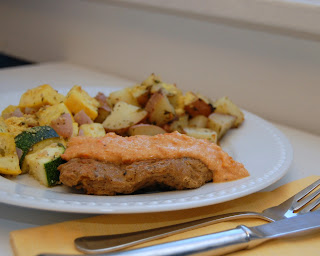 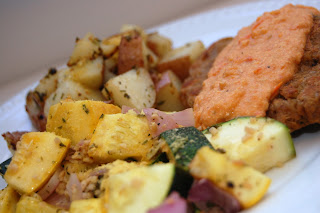 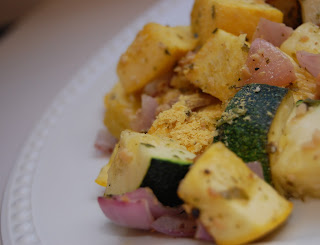 And that was that. Another super easy mid-week supper. Going to the grocery store and re-stocking is soooo over rated ;-)