By Heather Iacobacci-Miller September 01, 2011
Running & Triceps
Last night I set my alarm for an early morning run, however, I wasn't so sure I'd really get up and get the run in. I had my gym bag packed as a backup plan or Plan C was rest day.

The alarm went off at 5:15 am. And you know what? I was wide awake. I knew Jason wasn't going with me, so the dilemma became: to run in the dark alone or just be up an hour early.

I went for the run. I got to the Big Dam Bridge earlier than when Jason goes with me (sorry dear, but you can be slow going). The bad part about that was that it was going to be even longer before the sun started to rise. It was fairly empty, emptier than usual for 5:50 am I should say.

I ran sans music so that I could be very very aware of my surroundings and hear anyone approaching. I didn't see anyone for almost a mile, then I passed the guy who tilts his head to the right listening to his music. I waved, I think he waved (hard to say because it was really that dark).

A bit down the path, I saw a few cyclists, a few past me, but almost no other runners out. It was sticky humid, and I was trying to up my pace by mile one. Though, I could read the time or my heart rate, so I was going only by perceived exertion. I ended up doing about 5.2 miles total. The humidity was really starting to get to me (breathing wise). And the freaking gnats were out in droves. Hello extra protein?

Anyway, the sun finally started coming up and more people started to make an appearance by the time I was nearing the end of my run. Not a bad run, but certainly not easy peasy. I think I was also letting my mind get the best of me questioning myself about running solo in the dark. Not sure how well half training is going to go when I need to get in longer runs during the week and it's still in the mid-90's. Sigh.

I had resigned myself to being DONE for the day. But I ended up going ahead and doing triceps and abs at lunch. I sort of needed that stress relief, plus I really wanted to get tris done this week. Tomorrow will be a rest day and I don't do weights after a long run. So...today it was.

I did abs from Cathe's High Reps DVD and called it quits, for real.

Stir Fry on Grocery Day
I had a hair appointment at 3:30. The salon happens to be close to a grocery store, so I finally did it. Finally made it to the grocery store! But, I was so worn out from the full, long day, that I did myself a favor and went with an easy dinner: Stir Fry.

For the veggies, I used a bag of frozen California Style Veggies and added in some red bell pepper, fresh broccoli, baby corn, and Quorn Chik'n Tenders. I sauteed everything in my electric wok and served over rice. 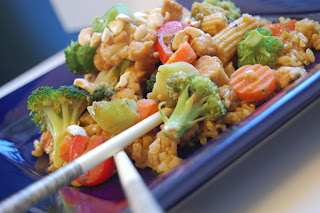 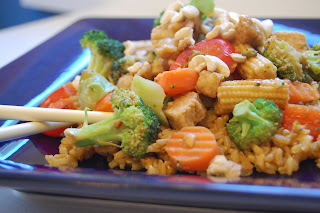 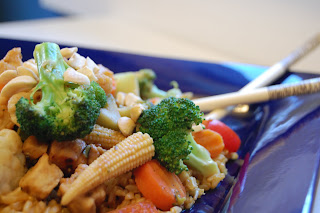 Simple, easy - and I just love the baby corn.