By Heather Iacobacci-Miller September 22, 2011
Leg Day
Today I packed my gym bag and hauled it to the office with me. My plan was to do legs at lunch and secretly hoped I'd feel up to the 3-mile run on today's half marathon training plan. I know, crazy talk.

I really wasn't sure how my legs would feel after two days of pretty hard runs. But they seemed (key word) to be a-ok. I warmed up with 10 minutes on the elliptical then started with a warmup set of 10 squats with no weight on the bar. Then I got to it:

I finished with some abs then headed home to get cleaned up before going back to work. This workout looks harmless enough right? Apparently my quads didn't know they were sore until I started with the lunge combo. Holy freaking ouch. I really thought I might fall down the stairs leaving the building by legs were shaking so much.


Combining Recipes
I had some cherry tomatoes that needed to be used pretty quickly. I also had a spaghetti squash, but wanted to do something different tonight than what I've been doing combining those two ingredients. This meant my wheels were spinning trying to come up with something new, but also not time-consuming to make. So what did this crazy brain come up with?

To plate, I put down the spaghetti squash and a small amount of the sauce then topped with a Gardein Chick'n Scallopini that I seared in a non-stick skillet.The only thing this was missing was a side of homemade bread. 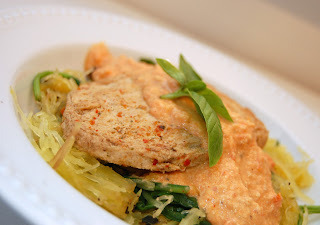 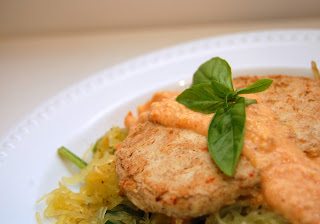 This probably sounds far more complicated than it was. It was just combining two recipes essentially to come up with one fantastic sauce. It took longer to cook the spaghetti squash than it did to make the sauce.