By Heather Iacobacci-Miller September 06, 2011
Remodeling Snafus
Well, the bathroom painting project has definitely gotten more complicated. There was a small amount of patchwork that needed to be done before we could start paining, while Jason had all of that stuff out, he decided to patch a few other spots around the house.

We have a very old house (circa 1890) so settling creates cracks here and there. There was one spot that was getting really bad in the entry. When Jason started to poke around, he realized that the person who installed the sheetrock for the ceiling did not attach it to the floor joists properly so there was about an inch space between the sheetrock and the original lathe.

There had been a small leak many moons ago that had softened the sheetrock joints, and gravity started taking hold so the whole area was starting to sag as it wasn't attached to anything. Nice right? 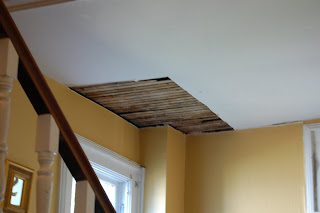 So now we have a nice whole in the ceiling where Jason had to pull down all of the sheetrock so that he can properly attach new sheetrock. Pretty huh? Luckily, we have spare sheetrock from previous projects.

Needless to say, painting the bathroom didn't happen. We still have to sand the patchwork first. And since all of this was going on, for dinner we just went with the veggie burgers I had made up to freeze.

Since I rearranged my half training plan, today was a non-running day for me. My fave spin teacher is now teaching the Tuesday class, so that worked out perfectly for me today. Though, I should have gotten out and run in the crazy nice weather we're having. I don't have to run at 5:30 am to beat the heat now.

Before spin, I got in my bicep workout for the week. I went with a giant set of 3x8 as it's very efficient time-wise.

It was a pretty good combination of exercises. I need to increase my weights for incline curls. I feel like I'm sort of at that halfway point where I just need a pound or two. But next week I think I'll try to do as many reps at the higher weight and drop when I can't do any more at that weight.

Tofu Tuesday
I really can't believe the cool down we had suddenly. This morning it was a very chilly 57 degree swith a high that might not have touched 80; what a change over last week's 100 degrees. Since the weather was so pleasant, I decided to grill out for dinner.

I really can't stress how incredible the weather is all of the sudden even if I am wearing 3/4 length sleeves ;-) . It was barely 80 degrees and almost no humidity. Such a refreshing change, and this type of weather combo tends to bring incredible blue skies.

I had already made up my mind first thing this morning that I'd be grilling, so I started pressing some tofu before I left for work. Then, at lunch I started marinating it in a very simple marinade of balsamic vinegar, OJ, garlic, parsley, agave nectar, and Dijon mustard.

For the meal, I went with a Grilled Tofu & Veggie Salad since we had sandwiches last night. I grilled up some portobello mushrooms, sweet potatoes, Japanese eggplant, green bell peppers, squash, zucchini. I also topped the salad with some roasted red bell peppers (jarred) and dressed it with a simple drizzle of the tofu marinade. I love being able to just make one "sauce" to use as both a marinade and a dressing or dipping sauce. 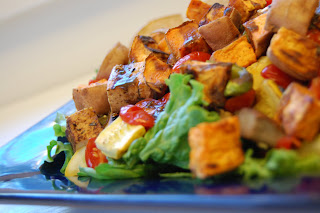 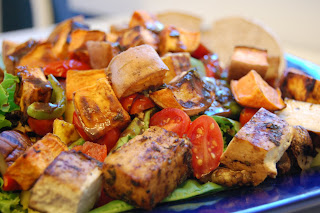 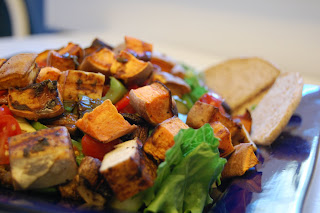 Since you see the grilled salad often, I won't repeat how much I love them ;-) I'm trying to get my fill before it turns into chili season, which I probably make as often as these salads.