By Heather Iacobacci-Miller September 27, 2011
Feeling Alive
As I was trying to drift off to sleep last night, my mind started wandering. Sometimes this is a bad thing as I end up wide awake thinking, thinking, thinking. But this time it more reflective. I was thinking about why I run.

I used to hate running too actually. And not that long ago actually. I used to run just for the cardio factor. I tried to rush through it, hurry up and get it over with. I was focused on how much is sucked, how many other things I could be doing instead. I would use the time not to enjoy, but to plan out lists, to set out a plan of attack for chores (do x, then y, then z).

This did not thing but make me anxious actually. I felt even more rushed to get the run over with so I could get going on a list or chore. Move along to the next thing. And before I ever ran outside, it was even worse as you can imagine - stressing out about to-do lists while trudging away on the treadmill was pure torture.

But I kept running. Why? I wanted to like it, especially after Jason convinced me to start running outside. I loved the sunshine, the fresh air. But I still didn't allow myself to enjoy the running. I enjoyed running with Jason, but that's about it.

Then one day, I stopped all the thinking. I picked me head up and looked around. I noticed things I had never noticed even though I was running the exact same route. I focused on the beauty around me, on the trees, the breeze in my face, the sounds. I got out of my head and it was the first time I had ever run and enjoyed it 100%. I wanted to just keep on going all day long. Finally, it clicked for me. It was a major turning point. I wanted to be out there; I wanted to push myself and shoot for more miles.

Running has become my form of meditation. It's "me" time. It's not always perfect. I've had some really really hard runs, mentally and physically. But that's part of it. Running teaches you about yourself. You learn that your body will carry you so much farther than you ever thought, even when your mind is objecting. And when you can get the mind and body in sync, you have perfection.

And saying that a run was awesome, fantastic, runner's high inducing does not mean that it was a cake walk. I still feel it. I still know I worked my ass off. And that's part of it. That sense of accomplishment.

And I have realized that that running makes me feel truly alive. Running is everything about life - it's feeling your body work, it's enjoying nature, it's learning to trust yourself, to believe, to dream big, to push yourself...to live.

Running & Lifting
So at lunch today, I lived it up with a 4.5-mile run around my neighborhood. While my neighborhood is not exactly my ideal running route, it saves about 30 minutes by not driving down to the river and back. It's not that it's a bad place to run, but you have lots of stopping and waiting for traffic, it starts off on a loooonnnnggggg, sloooooowwww, steady incline that is incredibly deceiving. Oh and then there is the camber of the road to contend with - hello IT band injury.

Anyway, I got it done and it was a pretty good run. It was a little warmer than I had expected, but the humidity was down and there was a nice breeze. However, I've decided I must look a little too friendly running. Today I had someone pull next to me to offer me a business card and pen about some new supplement to keep me healthy. DUDE - I'm freaking running what the hell am I supposed to do with a pen? I told him I'd take the card and and shoved it into my water bottle strap.

Then during my 12-miler on Sunday, I had a really nice couple stop me for directions on the path. I know they meant no harm - they thought they were heading in the right direction towards one of the bridges. But they weren't so I had to redirect. Do you ever have this happen?

This week is supposed to be a back off week for me in terms of mileage. My half marathon training plan has me scheduled for 5 4-milers. I won't lie, already going to change this up. After my IT Band injury last November, I am really paranoid about running too many consecutive days. Maybe I'm being overly cautious, but better safe than sorry. Plus, I'm already have too many piriformis/sciatica issues as it is.

So, instead, I plan on just 3 or 4 days, likely have 2 slightly longer runs, but no double-digits for the week. I'm supposed to do 20 miles overall, so I'll just figure out how to divide that out in a way that best suits me.

After work I got in biceps and abs. The workout wasn't anything spectacular - just got in there and got it done. I did 3x8 except for the alternating curls where I did 3x6 as I was going with heavier weights again.

I did abs from Cathe's Power Hour DVD then stretched the legs for the second time today.

BBQ Burritos
Once again I'm slacking on getting to the grocery store. For the most, part, we aren't really low on anything though. So we can make it until the weekend pretty easily as long as I get creative of course.

I almost went with a grilled salad, but have been really craving the flavors of a BBQ sauce. So, I went with BBQ Portobellos & Black Bean Burritos based off my BBQ Portobellos & Tempeh recipe. I was out of tempeh as I used it in my Chipotle Tempeh Chili last night. So, I just subbed the protein source with good old black beans.

I added in some Daiya and shredded lettuce before browning the burritos in a pan. I really like crispy burritos. Though, as you can see from the pictures, they didn't look so pretty. I have a really bad habit of overstuffing my burritos. So, as soon as I added the filling and tried to fold them, they sort of didn't cooperate. 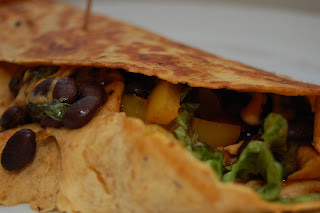 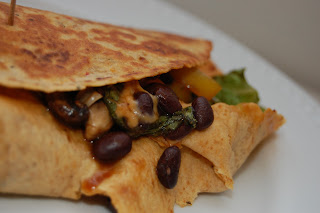 I'll admit, the perfectionist in me got pissed. They were definitely not photo-worthy, but I thought I'd take pics anyway to show you that even ugly dinners can be tasty dinners.