By Heather Iacobacci-Miller September 13, 2011
Triceps & Spin
I'm going to chalk it up to the full moon, sleep has been alluding me the past couple of nights. I feel like a zombie and the allergies aren't helping. Hello bags under the eyes. Again, I was dragging this morning, but hit up spin for the much-needed boost of energy.

Before class, I got in a triceps workout. I did the same as last week because....well, I was sore after the workout and it was a quick one I could squeeze in. And yes, you could argue that I shouldn't be trying to squeeze it in. I will agree. I did the workout as a giant set of 3x8 with the exception of the dips where I did 10 reps for each set:

Next week I'm going to really sit down and work on my weight lifting splits and workouts. I feel like I'm in a major rut and not focusing on the weights quite like I should. Of course, the same thing happened the last time I was trying to train for a half marathon. Eventually you just run out of time in the day to get it all done.

Taco Tuesday
Today I wanted an easy dinner again. Though, I do have several butternut squash that a friend gave to me that are just begging to be used. I had thought about a Butternut Squash & Black Bean Chili, but we've had a warm up in our temps again. I even thought about a Thai Curry Butternut Squash concoction (that may make an appearance tomorrow).

But I decided to KISS (keep it simple stupid) and go with the Taco Tuesday theme for sake of ease. I mean when it's Taco Tuesday, you have tacos. No crazy dreamed up recipes, just tacos right? Well, for the most part.

I was going to do a taco salad bow, but decided to cut up and toast up the whole-wheat tortillas instead. The first thing I do with the taco bowl is smash it anyway. 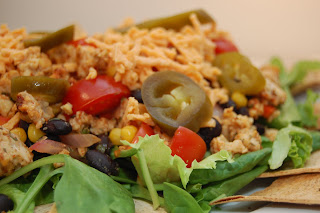 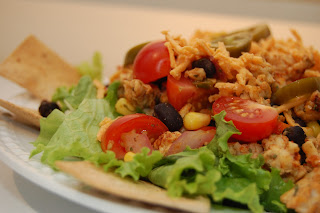 I served on a bed of lettuce and spinach, topped with Daiya Vegan Cheese, cherry tomatoes, and pickled jalapenos. What are your favorite taco salad toppings? For me, jalapenos are an absolute must ;-)