By Heather Iacobacci-Miller September 18, 2011
Football Day Recap
Is it me or did this weekend fly by? We got into Fayetteville yesterday just a little after 1 pm. Rather than a gorgeous, perfect football Saturday, it was gray, raining, and about 10 degrees cooler than the forecast said. Oh, and windy too. Great combo right?

At least we enjoyed a nice lunch with great company - my cousin. We were staying at the house of one of my cousins who recently moved out of Fayetteville. One cousin is still there, thankfully. It was so nice to meet up for lunch and catch up. We really don't get to spend nearly enough time together.

I had really wanted to try to go to a great place called Hugo's. They have several veggie dishes, but are always packed. We were just too hungry to wait for a table, and weren't going to hang out outside in the rain. Instead we hit up a pizza place around the corner, it actually started at home so we're familiar with it. I had no idea they had opened up a store in Fayetteville. 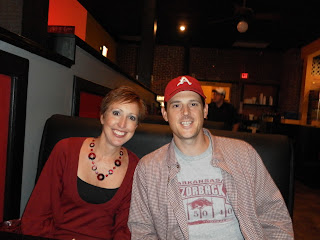 My cousin took a picture of me and Jason - please ignore Jason actually saying "cheese."

After lunch, we went back to my cousin's house to just relax for a bit. He lives fairly close to the stadium, so the plan was just to park there then walk over to the stadium and meet up with friends for tailgating later - like when/if it cleared up.

Our friends got into town and let us know they were at the tailgate spot. It had stopped raining, so we headed on over (me, begrudgingly to be honest). I am so glad I brought a coat along with me. It was so much cooler than anticipated. Of course, the rain and wind really didn't help matters at all. Oh, and rain = mud by the way.

I left my camera in my purse, in my car at my cousin's, so no tailgate pics. Though, they wouldn't have been terribly exciting. Everyone was crowded under the canopy trying to just stay warm. What ended up happening is that we sold my ticket to someone in the tailgate party and I went back to my cousin's house.

Honestly, it was for the best. I really didn't care to go to the game, and the weather made that worse. I knew I would make it unpleasant for Jason in the end. So, he got to go and enjoy the game with someone else who would enjoy it, and I got to spend more time with my cousin.

Sunday - Birthday
This morning we got up and headed back home fairly early. It was still gray and dreary, and Jason's allergies were a complete mess. I really felt bad for him. We got home a little after 12. We had planned on getting in the run today that we missed yesterday. Thankfully it had cleared up here - about 75 degrees, some clouds (a plus actually) and breezy, It was pretty humid though - so hello sweatfest!

I started getting myself ready for the run, and honestly didn't think Jason was going to join me because I knew he wasn't feeling the best. But, he got ready to go along with me after all. I got in about 7 miles and Jason got in 6. He is sticking to his half marathon training plan's running time (unlike me). Since he was going to go slower, we didn't run together. But passed by and waved at least ;-)

After getting home and stretching and rolling out on the trigger point kit, we got cleaned up and headed out for a really late lunch. Funny how birthdays change as you get older. Rather than being out partying, we go for a run and late lunch instead. But, he did get to enjoy going to the football game at least right?

I really don't know what we'll do for dinner since we had such a late lunch. I'll let the birthday boy make the call if he wants anything special or not. For now, we're going to sit back and enjoy the last bit of the weekend.