By Heather Iacobacci-Miller September 28, 2011
Gym Day
Today I went back and forth about my workout. In the end, I went with the gym after work rather than a run. I had really wanted to run because I got in a new pair of shoes yesterday. But, I had meetings and a going away lunch that meant an after-work run - and it was mid-80's today.

So, it ended up being a leg and shoulder workout for me. I started with 15 minutes on the elliptical as a warm up and essential did the same legs as last week. Though, I did go with one less set of the 3-point lunges at least. I do want to walk tomorrow.

Single leg square hops - 2x4 (on one leg hop front, then right, then back, then left making a box)

It ended up being a pretty good workout. In all likelihood, legs today means rest tomorrow.

Easy Dinner
I got home from the gym and piddled around before starting dinner. There are definitely chores I should have been doing. But I didn't. Lucky for me, they'll still be on the list tomorrow.

I briefly thought about grilling some veggies to go with quinoa, but decided to be lazy and just roast the veggies instead for a Roasted Veggies & Tomato Quinoa. It was sort of a hodge podge and I am going to the grocery store tomorrow: 1 small sweet potato from our garden, last few "trees" of broccoli, 1 zucchini, 1/2 yellow squash, red onion, and roasted red bell peppers.

For the quinoa, I cooked a little less than a cup with 1 can no-salt diced tomatoes + half can no-salt vegetable broth along with some seasonings (salt, pepper, garlic powder, basil, parsley). Once the quinoa was done, I stirred in a can of chickpeas that I had rinsed and drained. 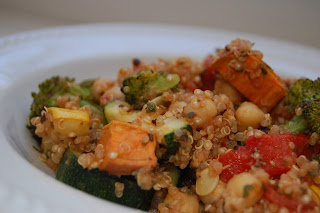 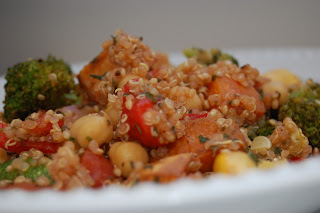 After the veggies were cooked, I simply combined everything and re-seasoned adding in some nutritional yeast flakes as well. Really couldn't have been too much simpler.