By Heather Iacobacci-Miller October 19, 2011
Another Plan B Workout
Wow, the weather here is just killing my running plans. Not only is it almost 40 degrees cooler than it was Monday, but 30 mph gusting winds? Really???? Mother Nature is not being very nice to me. I was planning on getting in an easy, 5-mile run. And while I've run in rain, sleet, ice, storms, I had zero desire to run in today's insane winds.

So, Plan B workout again today. I wasn't going to do spin again until after the half. But, considering Mother Nature's antics, I decided to go for it (spin that is). I was missing the class anyway, so this kind of worked out. I did do 2 miles on the treadmill before class. I know, crazy, but I'm trying really hard to stick to the planned mileage for the week. I will fall a little short, but not too bad.

I gotta say, again, spin kicked my butt. I don't know if blaming the half marathon training really is valid, but it's all I can think of that's making anything other than the runs feel sooooo much harder. I swear, in my mind I was spinning my little legs, but in reality, they were barely moving. Basically, I felt like I was riding into those 30 mph gusting winds. Definitely a humbling workout.


Chili for Chilly Night
I guess you could say it's finally chili weather now. So, what better way to warm up on a cold evening? With chili of course. I decided to try something a little bit different tonight. I've been seeing pumpkin puree used in chili recipes (like this awesome Pumpkin Chili Mole from Florida Coastal Cooking), so I thought I'd give it a shot.

Honestly, I wasn't sure what to expect by adding in the pumpkin. My assumption was that it would add a richer, creamier texture to the chili. I've made chili using cubed butternut squash, and it really imparted a nice sweetness. But with pureed pumpkin? It was a guessing game.

I decided to start with my typical Chipotle Tempeh Chili recipe and go from there. What I came up with was a Chipotle Black Bean and Pumpkin Chili.

Add in remaining ingredients and allow to simmer over low heat approximately 30-45 minutes depending on how thick you prefer your chili. 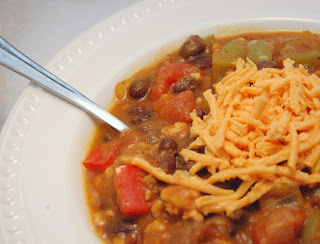 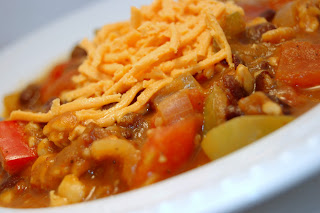 Garnish with your favorite chili toppings. I love sprinkling on Daiya Vegan Cheese and serving with whole-wheat crackers. With this on, I wish I'd had toasted pumpkin seeds as a garnish.

Now, how did the pumpkin work in this recipe? For starters, it made for a creamier chili. And with the addition of just a small dash of cinnamon, it brought out a bit of sweetness to counter the heat from the chipotle. Verdict? Winner.