By Heather Iacobacci-Miller October 11, 2011
Butt Kicked
Today I had planned on a 3-mile run at lunch with Jason. But I've got a confession to make. I'm starting to have pain in my right shin. So I decided to opt for a lower impact workout - spin - instead of going out for a run.

I'll admit, part of me feels guilty for skipping the run. Yes, I know it's totally irrational of course. I think it was more of wanting to run with Jason and to be outside rather than stuck inside the hot-as-hell gym.

But, rationale won out today. And of course it was a great class. But, I must follow that statement up with the fact that it also kicked my ass today. I felt so incredibly worn out from the get go. Just felt like a struggle. My legs just couldn't keep up. I felt like I had my butt handed over on a platter today. But, I'll still call it a good class - thank you endorphins.

So, great workout, but one that was way harder than it should have been. Not that spin is ever easy mind you. It's just not low enough in intensity to fall after a 6-mile run or before a 6-miler. So, I am afraid spin is going to have to be dropped from my workouts until after the half. I think I'm just spreading myself and energy reserves too thin right now and not fully recovering from my workouts.

For the other runners out there, have you had to cut certain workouts from your schedule while training? Maybe I'm being a wimp about it?

I did squeeze in triceps before class. I went with a giant set of 3x8:

I actually already feel this workout. I think it was the lying extensions the got me today.

Kitchen Mojo Missing
I think I'm losing my kitchen mojo this week along with my energy levels for working out. I really was completely ambivalent about dinner once again. Of course, when Jason started naming off dishes, I could tell you what I didn't want, but not what I wanted.

Time to maybe invest in a new cookbook or two for ideas or just go back through my older posts for recipes from last fall. Maybe it's just that seasonal transition. Wanting soup, but it's still 80 degrees out. We had to turn the fan on to eat the Red Beans, "Sausages" and Quinoa last night and same with chili.

Jason mentioned sandwiches a few times, including sloppy joes. I've made them one time...ever. Last year I came up with Sloppy Seitan Joes. So I decided to run with that recipe only using tempeh instead of the seitan. I thought the tempeh would be more authentic in texture perhaps. Not that I could tell you the last time I had a real sloppy joe sandwich.

Directions:
In large pot, saute onions, carrots, peppers, garlic, and crumbled tempeh approximately 3-4 minutes. Then add in remaining ingredients and allow to simmer until the liquid reduces and the mixture begins to thicken, approximately 45 minutes.

*For a shorter cook time, you might try starting with 1 1/2 cups of water. 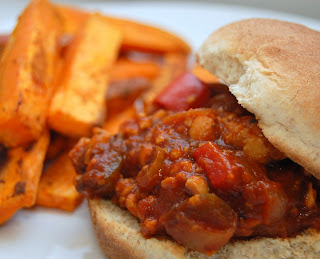 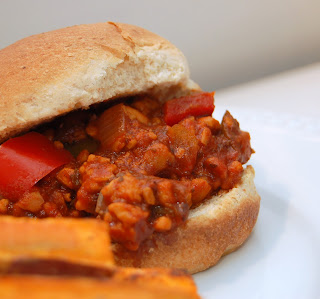 I thought these turned out really well. Of course, I really have no comparison for them as I don't remember what sloppy joes are even supposed to taste like. Jason seemed to think they needed ketchup as he dipped his in ketchup rather than using it for his fries.