By Heather Iacobacci-Miller October 20, 2011
Running Woes
I know my friends from the north are laughing at me when they read this - but holy crap it was cold this morning - 40 degrees! At least the winds weren't going to sweep me off my feet.

We did warm up to 60 degrees thankfully. But that feels so chilly after the temps we had over the weekend and up until Monday. Can we just not ease into the cooler weather? I'd like some time to acclimate please.

I'll admit to being a huge weenie about cooler temperatures. It really made me rethink running today. Of course, I really wanted a rest day to be honest, so that didn't help my mental state. The cooler temps became an easy excuse. Plus, it was supposed to be a tempo run. Basically, I spent my day dreading the run and trying to talk myself out of then into the run.

Honestly, I don't know where my head is at this week with workouts and running. I flat out don't want to do anything. I feel mentally and physically exhausted and am questioning why on earth I signed up for the race to begin with. I hate racing. I guess I just wanted to prove I could do the miles? I have no idea. But I feel like throwing a big fat baby fit.

Anyway, I would have taken today as a rest day, but I am scheduled for a long run on Saturday and know that I must rest tomorrow. Plus, I have a hair appointment so I couldn't get in the tempo tomorrow even if I changed long run to Sunday. Sooooo, that meant I had to get it done. I was supposed to do a tempo run: 1 mile warmup, 4 miles at 8:24 min/mile, 1 mile cool down.

Smart or not, what I decided to do was try to do the run at my estimated race pace of 8:45 min/mile instead. I guess in some ways I psyched myself out that I couldn't do the 8:24 pace and rationed that at least I was working harder by doing the race pace. Cop out perhaps?

So, what happened on my run? I kicked ass is what I did. I don't know how; I don't know what clicked, but everything came together. I stopped fighting myself and took it one mile at a time. I managed to do 6.2 miles at 8:22 min/mile average. That'd be faster than the tempo run was supposed to be and for 2 additional miles and much faster than the half pace I thought I was going to do.

What have I learned? That I must stop doubting myself.

Another Cold Night = Soup
One thing I didn't cop out on was dinner. I had some Creamy Green Chile Sauce leftover from the other day and really didn't want to let it go to waste. I had thought about burritos or enchiladas, but I had no tortilla wraps and really didn't want to make a random trip to the store for just a package of wraps (which the store by us wouldn't have the brand I wanted anyway).

Jason suggested I use it in my Spicy White Chili recipe. But we just had chili. Of course, his response was that chili is like pizza, as long as it's a different flavor, you can have it more than once in a week. Touche my dear, touche.

Instead of going the chili route, I decided to come up with something more soup-like than thick, stew or chili like. My mind got to going and I came up with a Creamy Green Chile Chik'n Soup.

Directions:
In large pot, saute poblano, bell pepper, onion, and garlic until vegetables begin to soften (approximately 5 minutes). Add in vegetable broth and spices and allow to simmer until vegetables are cooked.

Using an immersion blender or food processor, puree until smooth. Stir in Creamy Green Chile Sauce and carrots. Add additional broth if needed and cook until carrots are mostly done then stir in the corn and seitan.

Continue to simmer until the carrots are soft. Re-season if needed. 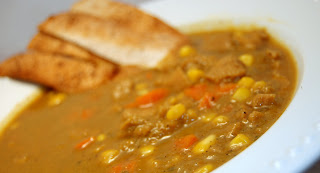 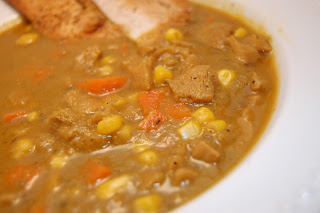 Since I was out of tortillas, I just toasted up some strips of whole-wheat lavash that I seasoned up with similar flavors as what was in the soup. Granted, it doesn't look pretty, but it tasted great. I loved having a little texture from the corn and carrots to go with the super creamy texture of the broth/base.