By Heather Iacobacci-Miller October 17, 2011
Sunday Dinner
Other than my workout and errands yesterday, I was pretty lazy. I managed to wash one load of laundry and paint my nails at least. We watched a silly movie (Gulliver's Travels with Jack Black) mid-afternoon, and flipped around through mindless tv shows. So when it came time to discuss dinner, I was fairly lazy on that one too.

Jason had one idea, but the main ingredient was frozen. Then he mentioned a dish I haven't made in ages. Basically it's pasta with spinach as the base and a Creamy Lemon Sauce. Typically I add in another veggie like asparagus or artichokes. Last night I made the dish with spinach, artichokes and chickpeas. 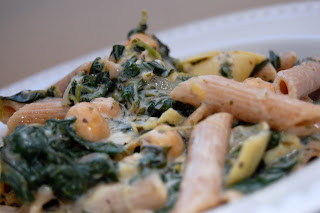 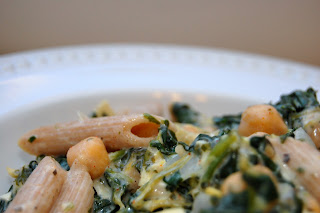 Monday Run
Today I packed my bag for either spin or running. I really wasn't exactly sure what I wanted to do. My half marathon training plan called for an easy 4 miles. The temps were supposed to hit close to 90 today, but drop off tonight after a front moves through. The rest of the week is low-60's. So, I figured a shorter run at lunch today would work, then any longer run the rest of the week after work because it'll be so much cooler, more ideal for a long-ish run.

Jason had gone to swim this morning, so I expected to be running solo. But when I asked if he wanted to join me, he said he would. So, that sealed the deal for a run over spin. We just never run together any more so this was something I really looked forward to today.

We did about 3.25 miles, and kept it pretty slow. It was definitely a good run, and nice break from work. It might have been a little warm, but it was a pretty day out, and it was nice to have someone to talk to during the run for a change. My internal conversations can get a little boring sometimes ;-)

Mexican Monday
For the second time since Friday, I ended up with a migraine. I ended up having to leave work a little early in fact. I don't know what's going on, but I start to feel some pain in my right eye then comes the headache and nausea. I thought it was just eye strain perhaps, but I really am not sure what's going on. It did feel better to take out my contacts and wear my glasses the rest of the day at least.

Of course, wearing glasses that are about 4 years out of date makes cooking a little interesting LOL. Luckily, it was an easy dinner. Tonight, I decided to go with quesadillas. I haven't made them in ages. I suppose they fit in nicely for Mexican Monday at least.

For the filling, I simply sauteed onions, bell peppers, jalapenos, tomatoes, garlic and Field Roast Mexican Chipotle "Sausages." I sprinkled the tortillas with Daiya Vegan Cheese and browned them up. Super simple.

I did get a little creative with the sauce though. I had some silken tofu leftover from last night's dinner, so I decided to take that and make a Creamy Green Chile Sauce.

Directions:
Place all ingredients in blender and puree until smooth. 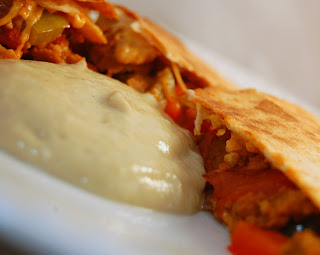 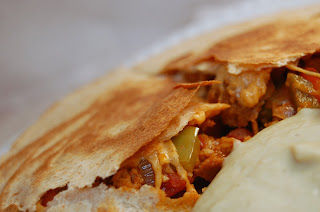 The sauce went perfectly with the heat from the chipotle "sausage." It is rather mild and I think would also work really well on a taco salad or even a veggie burger.