By Heather Iacobacci-Miller October 26, 2011
Last Training Run
Well, I guess I had hoped the massage would work miracles and I would be 100% a-ok today. I will say that I had much less pain last night and was able to sleep almost through the night. Unfortunately, I sit most of the day, and the more I sit, the more it begins to ache.

I did force myself out for my final run at lunch. I should have gone earlier though. The half marathon training plan called for a total of 4 miles: warmup, 2 x 1 mile intervals at 7:47 min/mile with .5 mile recovery jogs.

I did one mile at a 9 min/mile pace for my warmup then jumped right into the first interval. The winds were gusting like crazy and it was about 74 degrees. Not ideal speedwork conditions mind you (it seems like every single speed run was like this though - apparently Wednesday is not an ideal speed day...).

I hit my first mile interval at an 8 min/mile pace. I was ok with this, but not ok with the side stitch that smacked me at the end. I started to do my half mile recovery jog but part of the path was blocked as workers were cutting tree limbs. This meant I had to circle back long before my half mile marker, which of course threw off all other markers.

Instead of thinking it threw properly, I started my 2nd interval without properly recovering. And the side stitch was still hitting me hard. Usually I can breathe threw them, but not this time. About 2 minutes into the second interval, I had to walk for a second, then started back up. So, that mile was an 8:45 min/mile. Um...way the hell off.

But, I was trying not to beat myself up. It's the last run and at this point, how much is one final speed work really going to help? If it really does help a lot - please don't tell me this ;-)

Oddly, my sciatica pain was worse during the slower jogs and warmup. The faster I ran, the less that hurt. My lungs wanted to explode, but my sciatica was fine. Now, after I was totally done, it was throbbing again of course. Sigh.

After work, I did sit on the heating pad for a bit and rolling out on the Triggerpoint Kit and stretched some more. I plan on doing this for the rest of the week.

Barley & Broccoli as Plan B
I had originally planned on making a chili with some leftover kabocha squash. However, the cold front that we have coming through is moving slowly. So it was still in the upper 70's after work, and really humid. Chili no longer sounded like a good idea.

Honestly, I wasn't sure what to make. I didn't have a Plan B for dinner. But, I did have broccoli and tomatoes to be used. I also had barley on hand. So I went with a simple Barley with Tomatoes and Broccoli one-pot dinner.

In large non-stick skillet (with lid), saute broccoli, tomatoes and garlic for about 3-5 minutes then add in wine or broth and cover to steam the broccoli. Steam until broccoli and tomatoes begin to soften (approximately 5 minutes).

Remove lid and gently mash the tomatoes with fork. Add in chickpeas, tomato paste, sundried tomatoes, and seasonings and allow to cook approximately 5 minutes. Stir in barley and nutritional yeast flakes and re-season if needed and remove from heat. 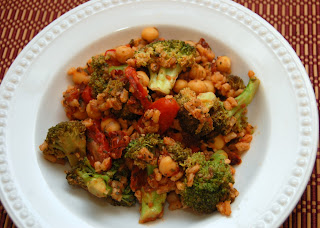 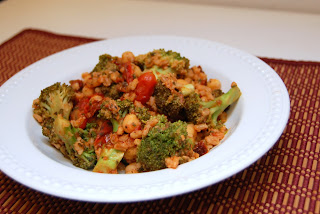 I was so happy with how this turned out. I think it'd be great either warm or room temp. In other words, easy to make ahead for a party or potluck.