Plan B Workout & Plan A Dinner

By Heather Iacobacci-Miller October 18, 2011
Plan B Workout
Well this week's workout plans are just flying out the window right and left. Yesterday was good though. A 3-mile run with Jason trumped at 6-mile solo run in almost 90-degree temps. Today I was going to go for that 6-7 mile run after work.

We had a strong cold front move through which dropped the temps from 90 to 50. However, "they" said it was supposed to start clearing by noon so sunshine and low 60's. 2pm it was still gray and drizzly and 50 degrees with 20mph gusting winds. Not exactly fun running conditions in my book.

Luckily, I have become more and more flexible with my workouts. While I might be really annoyed that the weather is messing up my plans, I at least had a backup plan. It wasn't my first choice for the day, but it worked.

I ended up hitting the treadmill for 3 miles after work then got in my biceps/triceps workout for the week as well. Like I said, not ideal because I hate treadmill runs, but I did intervals so that helped.

I wasn't feeling particularly strong today either. I'll blame that on the crummy weather, or perhaps just laziness on my part. But once I got going, I really got into the weights. Sometimes you just have to pick them up and get started.

I did some ab work as well before calling it done.

Plan A Dinner
Since the temps were so much cooler, I almost went for a soup tonight rather than my original plan. However, my workout put me home later, so I did myself a favor and went with original plan of Spaghetti Squash with Garlicky Tomatoes Sauce, Kale, and Chickpeas.

I already had a plan of attack for the dish. Going with soup would have meant figuring out the recipe, which veggies and such. Ok, probably not THAT big of a deal now that I think about it. So maybe soup tomorrow since it's supposed to drop into the 30's (crazy insane).

While the spaghetti squash was baking, I made the Garlicky Tomato Sauce. Since I was going to be adding in the kale, I used additional vegetable broth to help steam the kale. I added in the chickpeas at the end with the shredded spaghetti squash. 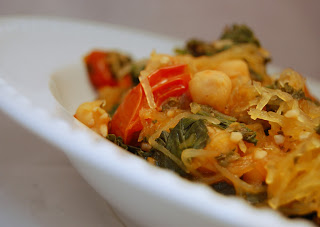 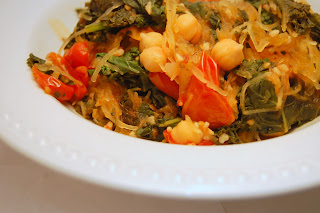 This turned out really well with the minor exception that I slightly overcooked the tomatoes. Next time I think I'll steam the kale separately since it takes longer than the tomatoes.