By Heather Iacobacci-Miller October 10, 2011
Running
How did Monday get here so quickly? I guess that's the sign of a really good weekend huh? I really wish the sun came up earlier, especially on mornings when I'm already up. Like this morning for example. Jason was going to swim, but Maddie woke us both up long before his 5am alarm.

The dogs have been sleeping downstairs because of Maddie's early morning antics (basically just wanting out of the kennel so barking and banging around). This morning we heard her start in with her barking. But it was that one certain pitch that meant she wasn't just being a butthead, she needed to go out.

You kind of feel bad for yelling all the way downstairs telling your dog to be quite when they're about to explode. But sometimes she's just barking because she wants water (as in toilet bowl water not the water out of the completely full water bowl) or who knows whatever crazy reason - like Heath being in "her" bed. Let's just say she can be a handful.

Anyway, so basically wide awake, but it was too dark to go for my run. Feels like such a waste of time. I suppose I could have gotten up and done chores of some sort. But, I would rather just stay in bed being ticked that I'm wasting time ;-)

What's the point of all this rambling? Basically just to let you know I've been up since the wee hours thanks to a crazy dog. I did finally get in my run during my lunch break though. Thankfully it was breezy out because that was the only thing that made it bearable. The temps were close to 80 already and it felt really humid out.

I almost decided to call it a rest day. Now I can't believe I ever thought of doing so. The run ended up being a really good one for me despite sweating like a fool. It should have been a relatively slow run, but everything was clicking properly so I just went with it. I managed to keep a 9:05 pace and didn't feel like I was really pushing myself. Love it when that happens.

I don't know if I should give the run down on the half training plan for each week then explain where, when, and why I change up the miles. You all already get that I'm not following the plan 100% and that my mind works in crazy little ways.

Riveting stuff I know. Though, some of you might actually like to see workout plans or running plans. I know that I like to see weight lifting rotations.

Productive Post Work
When I got home from work, I stretched again and rolled out on my Triggerpoint Therapy kit as my legs were feeling rather tight. Then I was feeling nice and productive so I did more loads of laundry and got the dogs bathed. They were terribly dirty and also really unhappy to be bathed. Heath does, however, love to be dried off. He rolls around in the towels and bounces around. Really cute.

Maybe I was being productive as I was putting off making dinner. Just wasn't feeling excited to cook. Plus it was one of those days when Jason and I weren't on the same page with dinner. He's been wanting more hearty fall dishes despite the fact that the weather is anything but fall-like right now. I was going to do quinoa with roasted veggies and chickpeas, but apparently he's tired of this style of dish (humph).

We mentioned Spicy White Chili, Thai Curried Veggies, even Red Beans and Rice. What I ended up doing was my version of red beans and rice: Red Beans, "Sausages" and Quinoa.

Directions:
In large non-stick skillet (make sure it has a lid), saute onions, peppers, garlic, and "sausages" for about 5 minutes. Add in seasonings, liquid smoke, tomatoes, water or broth, beans then stir in the quinoa.

Cover and bring to a boil then turn heat down and simmer for 15-20 minutes or until quinoa is soft. Add additional liquid if needed. 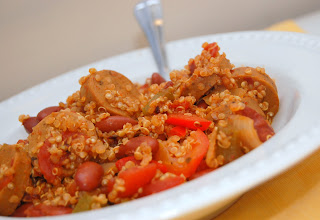 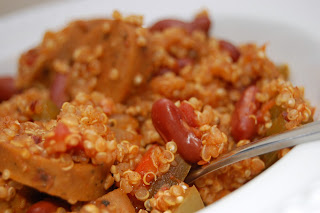 This turned out really well. It's definitely a hearty dinner that will leave you plenty satisfied.