By Heather Iacobacci-Miller October 27, 2011
Gym Day on Gray Day
I guess I am more worn out than I realized - plus less sciatica pain to wake me up means I slept straight through until just after 5 this morning. That never ever happens. No complaints mind you.

Even though yesterday's run was less than stellar, I am certainly glad I didn't have to do it today. The cold front that was supposed to push through last night was apparently running late. So instead of rain last night, we had wind, gray skies, and drizzle all day today.

I did hit the gym, but for weights only. I did warm up for about 15 minutes on the elliptical though. I did supersets for back and triceps (3x8) with some ab work done at the end.

It was a pretty decent workout. I had wanted to do chest as well, but have a really hard time working chest and triceps at the same time due to elbow issues.

Chili Kind of Weather
I am really glad I decided to make last night's planned dinner tonight rather than last nigh. Tonight just called for chili or soup.

I had some kabocha squash leftover from Sunday's meal and also had some poblano peppers that needed to be used. So I sort of melded two chili recipes into one new one. I chose a sudden new favorite of Jason's and one that I made previously that had kabocha so:

Add in the broth, beans, and spices. Let simmer for about 30 minutes then add in the kabocha* and allow to simmer approximately15 minutes.

*If you do not have kabocha already roasted, you can cube up and start cooking with the onions, peppers, and tempeh. Then add in your liquid and allow to simmer longer so that the quash has time to cook. 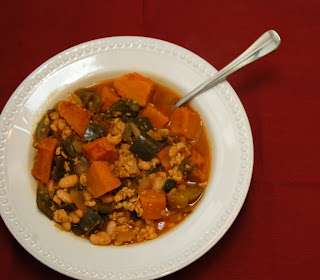 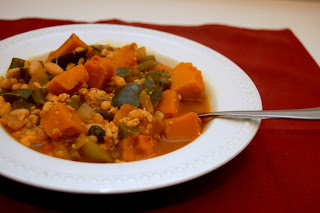 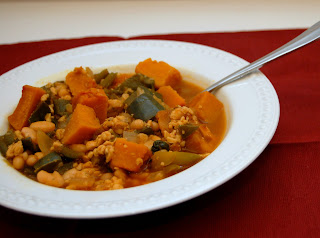 You could really take this chili in several directions including making it a fairly traditional tomato-based chili with black or red beans. I just thought it would be interesting to see how the kabocha and poblano played together.

I already knew I loved kabocha and chipotle peppers, but poblano peppers are very different. They are milder, but do have a heat that can sneak up on you at the end. This was really a nice balance of flavors and textures.