By Heather Iacobacci-Miller November 22, 2011
Relaxing Monday Evening
Last night Jason made some burritos for us for dinner. Nothing fancy, but they were quite tasty. I don't know exactly what all he added, but I know they had yellow bell peppers, onions, black beans, some leftover enchilada sauce. He toasted them up just the way I prefer too. I made sure to top with lots of jalapeno, but opted not to take photos.

We sat back and relaxed and watched Horrible Bosses. I know pretty much everyone gave it a thumbs up. And, for the most part, I thought it was pretty good. But sometimes movies when every single thing goes wrong and keeps piling up get to me a bit. So, by the end I was ready for it to be over. I'm really a terrible movie watcher is what it comes down to. But it was still a nice, relaxing evening.

Spin & Biceps
Today I hit up spin class again today. I started with biceps before the class:

Jason surprised me by showing up and riding next to me. I had mentioned I was going just in case he wanted to join me. I didn't really expect him to though. So it was a nice treat getting to exercise next to him today. Kind of a late birthday gift in a way.

Chili Kind of Night
A really great friend was home for a few days - she lives outside of Atlanta now. We had planned on her driving up to visit last night, but there was major flooding and interstate closures and such. Just not safe. The plan was for her to come up this evening instead. Unfortunately, one of her brothers decided to go home for the holidays a few days early, so she ended up having to stay at her mom's to visit. Definitely disappointed.

I guess the upside is that I had time after work to get to the grocery store for Thanksgiving dishes. I thought I was going to just do that tomorrow, and almost put it off, but thought the stores would probably be really crowded with last-minute shoppers and the shelves fairly bare. So, better to brave the store today rather than tomorrow.

And man am I glad I went ahead and got that madness over with. It was insane. I was ready to just ram other cars just to get out of the parking lot (which is entirely too small in nuts on a normal day). Sigh.

Since I was home a little later because of grocery trip, I went with something fairly easy to throw together for dinner - Chipotle Tempeh Chili. I was frazzled, annoyed, and didn't feel like thinking too hard about dinner. So, this worked nicely. 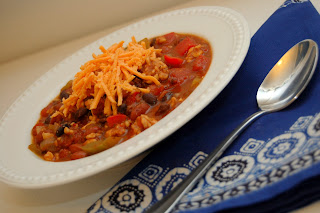 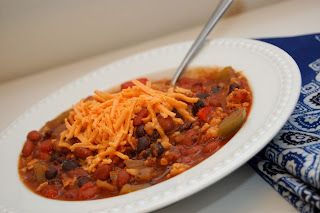 Have you finished your grocery shopping for Thanksgiving?