By Heather Iacobacci-Miller November 10, 2011
Legs & Back
Today was another gorgeous, but fairly windy day out. It started off in the 30's, but thankfully it did warm up into the low 60's at least. It's definitely starting to feel like true fall. No going back to summer now.

I dedicated today as my leg day (leg and back actually). I must set aside one day before a rest day for legs each week regardless of what I'd rather do. Though, I had no desire to do spin today, I'll say that much. Oddly, I was kind of looking forward to working legs.

While it's not my favorite muscle group, doing things like barbell squats can sort of make you feel like a badass. Of course, right now my weights aren't nearly where they used to be, but it gives me something to work towards.

Since I needed to get in back work, I went with trisets of 3x8 unless noted after a 15-minute warm up session on the elliptical:

I finished with hamstring roll-ins on the stability ball then I did some ab exercises.

Two words about the swing lunges: Holy Hell. Those are no joke. I had originally planned to do 8 each side with 12# dumbbells. After the squats, I opted for 10's and after 3 reps, opted for 6 reps over the 8. Yowzers.

And a new "note to self" do legs after work not during lunch. Sitting the rest of the day makes already shaky legs a sad situation.

Comfort Dinner
We had a bit of a fiasco getting out the door this morning. Once again, my battery was dead. Jason's car was parked in front of mine, so he couldn't exactly turn it around to jump my car. Thankfully, my neighbor was up and able to help us out.

So, I was late to work, Jason had to take my car to drop the maniacs (aka dogs) off at the groomer (late of course) and then take my car back to the dealership. Just a few weeks ago they assured us the battery was fine. Today, we are proud new owners of a new battery because the other one was anything but fine. Grrrr.

Since Jason would be picking the dogs up after work, that put him home a little later. I wanted something easy to make. He wanted something sort of comforting (think meat and potatoes). So I went with vegan version of meat, potatoes and gravy.

I roasted up baby gold potatoes with just a sprinkle of salt, pepper, rosemary, garlic and olive oil. Since the oven was already on, I went ahead and roasted the broccoli rather than steam or saute. I made a simple Wild Mushroom Sauce while everything was roasting in the oven.


Directions:
In a small pot, re-hydrate the dried mushrooms in water. Once they are re-hydrated, remove the mushrooms and finely chop, reserving the liquid in a small boil. 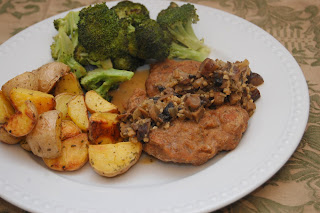 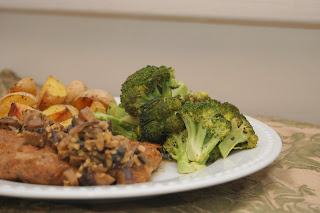 I was a little worried about the mushroom sauce, but it turned out to be fantastic. I think it'd be a great recipe for the up-coming holidays. And there is something so comforting about gold potatoes roasted. They're slightly crunchy on the outside, but soft and creamy on the inside.