By Heather Iacobacci-Miller November 30, 2011
Running & Legs
Well today we finally have sunshine and no gusting winds. I was beginning to think that would never happen. But, I decided to hit the treadmill and get in legs today rather than head outside for a run.

I must admit something first. I don't know why, but treadmill running makes me feel like less of a runner. I know that probably sounds silly. I mean, I'm on the darn thing running. I'm usually doing intervals trying to increase my speed. But, I don't enjoy it at all. I've never ever had that runner's high, awesome, love the world feeling from a treadmill run.

It just doesn't feel the same as the wind on your face, the sun on your skin, the feel of the pavement under your feet. There's just something so crucial to the enjoyment factor I usually equate to running that is just flat out missing.

But, I really need to work on speed, and the treadmill is a great way to get that done. I also really wanted to work quads today and then major focus on hamstrings on Sunday. So, this worked out best for the workout I was going for.

After the run, I hit the legs. I know that lifters are cringing right now. I almost lifted first (which is always what I recommend), but actually am happy with the way it played out. My legs/muscles were quite obviously warmed up nicely. I actually felt like I could have lifted heavier than I did surprisingly enough. Maybe because I was sooooo warmed up? Anyway, here's how it went down:

I did some ab work on the stability ball and using weights before stretching and heading out.

Way Easy Wednesday
As I mentioned yesterday, Jason had gone to Target recently. He made the mistake of going hungry, however, so that meant coming home with various new sauces. He thought he was picking up a curry paste, but it ended up being Patak's Tikka Masala Curry sauce instead (unfortunately not vegan though).

I went ahead and made some brown rice last night while making the chili because I knew it would make for an incredibly easy dinner tonight using the sauce along with homemade seitan I had on hand.

I simply sauteed red onions, bell peppers, and carrots until soft. I stirred in the seitan and allowed that to cook for about 3-4 minutes before stirring in the sauce and adding in some frozen peas. I just let that simmer until the sauce was warm. I reheated the rice and served. 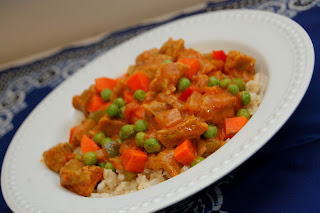 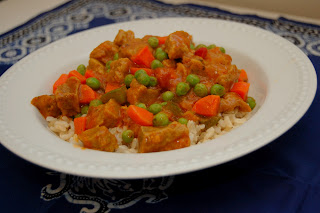 I think the sauce had good flavor. It was fairly mild for my tastes, but not bad. I certainly made for an easy dinner. I'd love to try my hand at making a vegan version of this sauce now.