Sleep Over, Silence and Lazy Sunday

By Heather Iacobacci-Miller November 27, 2011
Friday Night Sleep Over
I feel like this weekend has just been so packed that I almost don't even know where to begin. And how is it almost over for that matter? Friday, my sister ended up staying the night with her two kiddos. This was their first over-night stay at our house, and to say they were excited is a massive understatement.

So after a day with a full house that ended up included: sister, her 2 kids, my mom and her husband, plus my cousin and his daughter, we ended up having house guests. Originally it was just going to be Sarah staying and the kids were going to ride back home and stay with my mom. But, plans ended up changing last minute, so A and C got to stay as well. I now have several new pieces of artwork including a birthday card and necklace A made for me. 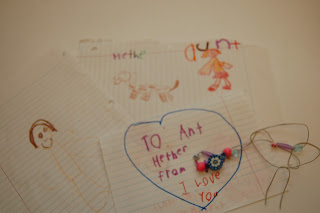 Uncle Jason did an amazing job entertaining them I must say. Though at one point he came downstairs thinking he had been playing with them for about 2 hours and thinking was close to their bed time...only to discover it wasn't even 6pm yet. I swear he shed a tear.

When you're not used to having high-energy kids around (to go with our dogs plus my sister's dog), it can really throw you for a loop. They are non-stop questions, non-stop activity, just non-stop. I wish I could bottle that energy up! And I say this not saying that my niece and nephew are bad kids either. They were so well behaved, honestly. So happy to be staying.

Jason blew up a blow-up bed just for them. Not that they slept on it mind you. But they thought that was loads of fun. Kind of like camping out. And it made me remember staying with my grandmother or my aunts and having them make pallets in the floor for us. Why do kids like sleeping in the floor so much?

Saturday Silence, Gym, Errands
Anyway, Friday was a long long day. Saturday we all got up around 8. Jason made the kids some pancakes and watch some cartoons with them. He would have been watching the cartoons anyway, but them being here made for a valid excuse of course.

Sarah had planned on going to the gym with me. But she found out last minute that the kiddos were supposed to be going with their dad to another family Thanksgiving. So she had to rush out by 9:30 and get back home. Jason left right at the same time to go to a master's swim class. As soon as the doors shut, all I heard was silence. And it was the best sound ever. The dogs looked at me and slowly ambled into the living room and crashed out. We were all exhausted to say the least.

But, I managed to tear myself away from the silence and hit the gym for legs, shoulders, abs. After a 15-minute elliptical warm up, I went with trisets then did abs at the end.

I also did some hamstring rolls ins on the stability ball, 2x10, and 2x6 3-point lunges (lunge front, then side, then rear for 1 rep).

Jason and I ended up running a few errands, Maddie was out of dog food, I wanted to hit up the local running store to take advantage of Small Business Saturday - perfect timing as I needed new shoes - and took in a late lunch. We were fairly lazy after lunch, just watching movies for the most part. Nothing terribly exciting. But we were trying to decompress.

The late lunch meant that dinner was really late as well. But, it was so good. The weather has been really crummy, rain, rain, gray skies, more rain. So dinner was a vegan creamy tomato soup with grilled (daiya) cheese sandwiches. Bad blogger - no pictures. I was still recovering from Friday ;-) We will definitely need to make this soup again, it's really simple, and I promise to post the recipe with pictures then.

Relaxing Sunday
This morning it was low 30's, windy, and gloomy out. I was itching to take my new shoes for a spin though. I usually wear Brooks Ghost 3, but now they have the Ghost 4 out. While I normally hate treadmill runs, the new shoes were my catalyst for running today despite having to take it indoors.

Jason went to the gym with me to do weights. I thought I was going to just do 2-3 miles and then do chest and back. I started with 1 mile as a warm up then did 2 minute intervals (I think I did 5). The treadmill really sucked today - definitely all mental. I was in love with the shoes though. They are what kept me going honestly, oh and the fact that I'm oddly competitive with myself. I couldn't stop at 3.25 miles, so I went to 3.5. But then I couldn't just stop there. Not a chance. So, I ended up with 4.25 miles after all was said and done.

Jason and I got home and showered. Well, I did my whole stretch and roll routine, then showered. I think we were about *thisclose* to being bad and going out to eat. But I made myself stay in PJs, didn't do my hair or makeup, and pulled out leftovers for lunch.

It was the right choice, but man I am SO sick of doing dishes right about now. I swear we have washed every dish at least 3 times by now. Not even an exaggeration. We hand washed the China to get ready for the Thanksgiving meal, then had to hand wash all of it after the meal. I also had cleaned all the pots, pans, dishes used for cooking, every single piece of silverware was used, washed, used and washed. In fact, as I type, the dishwasher is going yet again.

So, Sunday afternoon is a lazy one for us. I really want to get the tree up, but we'll see how that goes. I already mentioned it once and Jason said he was "too shaky" from his weight workout and didn't want to risk falling down the attic stairs. Humph...great excuse right? I've been working my way through laundry, so I don't feel completely non-productive sitting around in PJs.

Have you recovered from Thanksgiving festivities?