By Heather Iacobacci-Miller November 08, 2011
Spin and Triceps
Today was another spin day for me. I really am itching to get out and run, but I know it's not the best thing for me right now. At least having storms blowing in sort of squelched the running.

When you live in a tornado alley, if it's 78 degrees in November and a front is moving in, it can never be a good thing. We were under a tornado watch most of the day. Definitely will keep you from attempting an outdoor run.

Luckily, the skies didn't open up until after work. But the winds were whipping and the skies were threatening and ominous, air just heavy.

I want to incorporate other triceps exercises into my workouts, but the majority of them hurt my left elbow, so I feel like I pretty much do the same thing week after week.

New Flavors
Jason and I both have been wanting to come up with some different recipes lately, not just new, but using ingredients we don't often buy and keep on hand.

For some reason, I keep gravitating to grain salads and he's heading towards the Asian foods. Since he got his Tofu Noodle Bowl last night, I got my grain salad tonight.

I discovered last year that I actually do like beets. I just don't think to buy them often. I thought the earthiness would pair well with the sweetness from kabocha and that the textures would go well together.

I also wanted to amp up the nutritional values, so that's where the kale came into play - plus I just like the additional color and texture it adds.

Cook wheatberries in the water per package direction while you begin to prep the rest of the dish (I usually turn up heat higher than suggested for faster cooking).

In a small bowl, whisk together mustard, vinaigrette, agave, and vegetable broth.

Meanwhile, saute onions and garlic in large skillet approximately 3-5 minutes then add in the kale and your sauce/dressing. Cover with lid to allow kale to steam. If it becomes too dry, add additional broth as the extra liquid will help to season the rest of the salad.

In a large bowl, combine all ingredients and re-season with salt and pepper as needed. 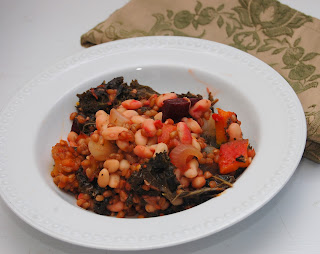 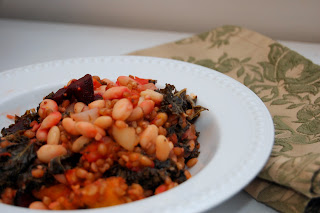 This was good, but there was some flavor component I felt was missing - maybe citrus. I did really enjoy the flavors of the beets, kabocha, and kale though, and great textures.

How do you go about coming up with dinner? Are you a recipe follower or do you just go with flavors you enjoy and come up with something new and different? Obviously, I am not a recipe follower. I am a believer in learning some basic techniques and knowing flavor combinations that I like and going from there (for better or worse).