By Heather Iacobacci-Miller November 19, 2011
Friday Finds
I must recap my Hobby Lobby purchase yesterday for my Thanksgiving tablescape. As I mentioned, I love tablescapes. Since I found out I family was actually coming over for Thanksgiving dinner, not only have I been going over recipe ideas, but also table decoration ideas.

After a 40-minute bumper-to-bumper, 5 mile drive to Hobby Lobby, I did actually score this awesome wreath for 80% off (originally $70, got for $14). I don't really want the wreath so much as the accessories on the wreath, which easily would have been more than $15 on their own. 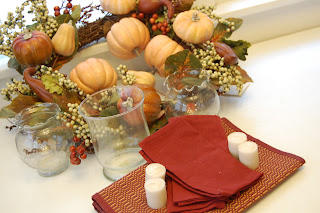 Is it terrible to take the wreath apart? Please say no, because that's the plan. I have the napkins, place mats, and candle holders. So I'm thinking it all goes well together. Now to implement ;-)

And I'm still not set on the menu yet, but here are some ideas as some of you guys sounded interested:

Saturday Run
Today was one of those oddly warm November days. It was right at 60 degrees when I headed out for my run. Once again, it was insanely windy. I went a different route so my out was tailwinds and return the dreaded head winds. At one point the winds were hitting me sideways and literally pushing me across the path.

I really only went out with 6 miles in mind. But I actually felt really good today. For the first time in who even knows how long, my sciatic pain wasn't the forefront of the run. It came and went, but nothing excruciating and not even like yesterday. In other words, in comparison, it felt pain-free.

Well, it wasn't entirely a cake walk. The wind was brutal and the last half a mile was when the pain set in and set in hard. But, I will call it an incredibly successful 8 mile run all things considered.

I got home and did my typical routine of stretching and rolling out on my TriggerPoint Therapy Kit before getting cleaned up.

Errands & Non-Excitement
Since we're having family over for a Thanksgiving meal next week, we need to figure out better seating. Our kitchen table will fit 6 as a tight squeeze, but it'll be 5 adults and 2 kids. We have a pool table that we bought a huge piece of wood to go over the top in hopes of using that as a dining table one day. The problem is we've never found chairs that will work.

So, today Jason was on a mission. He spent a good 30 minutes or more online looking at chairs and benches. Then he decided we needed to hit up a furniture store. I swear the guy helping us almost high-fived Jason over having a pool table instead of a formal dining table.

We ended up at Kirkland's because I knew they had parson-style chairs. Low and behold, they seem to be the ideal height. Problem, none left in stock. Go figure right? Lucky for me, my sister texted me that Old Navy had coats on sale for 75% off from noon-5. Oh and conveniently Old Navy is right next to Kirkland's. 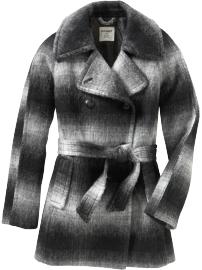 I scored this sweet coat for a mere 25 bucks. Not bad considering it was originally 99 bucks. I firmly believe a girl can never have too many coats, especially when said girl finds 70 degrees chilly.

After Old Navy, it was way past time to eat. Since the Razorback game was about to start, we headed over to Razorback Pizza (mostly because it was close not because of the name) to grab lunch and let Jason watch part of the game.

I really could care less about the game, so after we finished eating, we headed home quickly so he wouldn't miss anything exciting. I had nothing better to do, so I did some non-exciting (to most) things like make some rolls for Thanksgiving.

I have a French bread recipe that I converted into a whole grain recipe and can make them into rolls. The family really enjoys them for the holidays (so much better than store bought of course). But, my niece especially likes them and request mini-sized rolls that she can take home and keep in the freezer. Who am I to deny that sweet angel homemade rolls from her Auntie Heather? I simply can't.

So, not an exciting evening, but not a bad one either. I consider this to be a good day. It wasn't as originally planned, but worked out nicely in the end. I did get a coat after all right? ;-)