By Heather Iacobacci-Miller December 28, 2011
Intervals & Weights
Today was another sunny, mild day here. It was not easy making myself go to the gym rather than run outside. But, I really needed/wanted to get the rest of my weight workouts done today as I had originally planned. I also wanted to do some intervals. Intervals are easier to do on the treadmill, or for me anyway.

When I'm outside, it's harder to focus on speed rather than just enjoying the fresh air and sunshine. Though, with my handy dandy new Garmin, I can actually keep track of pace finally. So maybe I can do my speedwork more correctly rather than going balls to the wall with the first interval then not being able to finish out the rest.

Anyway, I wasn't planning on killing myself with intervals then doing weights. Just wanted to get in the speedwork. I started with 1 mile at a 9:22 min mile at 1% incline as my warmup before doing the following intervals:

I finished out the mileage to an even 3.5 slowly increasing the speed so that the last minute was an 8:44 min mile - which kicked my butt after the intervals I had done.

Next was trisets for back, triceps and hamstrings with some short ab work at the end. The sets were done as 3x8 unless noted.

Overall, it was a pretty good workout. I felt weaker with triceps today, but felt like I should have possibly gone heavier with my barbell rows. But I struggled with the chinups. Guess it's all about the order of the exercises - well, that plays a role.

Crazy New Recipe
Sometimes it's funny how recipes come about in my household. They can come from a combination of many different recipes, often based on trying to find something to do with what I have on hand. Sometimes they just happen - like just adding a bit of this and a bit of that.

Then there are the times when I mention to Jason a couple of ingredients and something I have in mind. Then he takes those ingredients and my idea and adds to it, often complicating it just a bit more than I already would ;-)

That is how this recipe for my version of a Korean BBQ Sauce (Kalbi aka Galbi) used to make vegan Korean Tempeh BBQ Tacos came about. I mentioned needing to use some portobellos. I named off some ingredients then suggested my BBQ Tempeh and Portobello Sandwiches.

However, he remembered seeing a recent episode of Guy's Diner's, Drive-ins and Dives about some Korean BBQ joint. Hence the Korean BBQ Taco suggestion.

While he was watching the movie Tron, I was searching recipes like a crazy woman, hell bent on finding the perfect Korean BBQ sauce. I found so many different versions, some looked sweeter, some looked spicier. Most included a significant amount of sugar.

I saw some that used pears, apple or pineapple juice. The closest thing I had was fresh pineapple. And, I think the citric acid was mainly meant to break down and tenderize meat. Lucky for me, I didn't need that since mine would be vegan.

Some recipes included kochujang or gochujang sauce which is a Korean chile paste that I definitely don't have on hand. So then that meant trying to find alternatives for that. I had a feeling Sriracha would be involved, and it was. I have plenty of that ;-)

Directions:
Combine all ingredients up to the water in medium bowl and whisk together well. In a small dish, combine cold water and cornstarch to form a slurry then whisk that into the other mixture. Using an imersion blender or food processor, puree ingredients.

After the tempeh has marinated, saute in a large, non-skillet pan until heated through. Serve on corn tortillas with a simple Asian Cabbage Slaw and sour cream (vegan, cashew cream, whatever you prefer).

Directions
In large bowl, whisk together vinegar, salt, pepper, agave then add in the vegetables and toss well. Let refrigerate at least 1 hour. 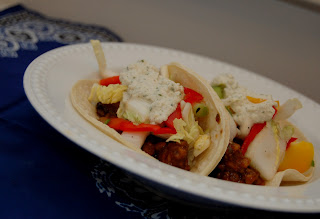 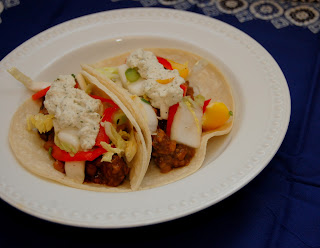 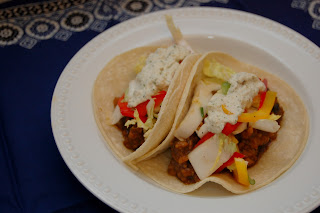 And the verdict? Flipping fantastic. It was the perfect combo of spicy and sweet. Then the crunch from the slaw...perfect. I think leaving the corn tortillas as a soft taco works very well, probably better than crunchy (but I could be wrong of course).