By Heather Iacobacci-Miller December 29, 2011
Perfect Day for a Run
Today was another gorgeous, sunny day here with temperatures hitting 60 degrees. Now that's my kind of December! The gym has been unstaffed all week - meaning no spin class. So, thankfully it was another great day for an outdoor run.

I had wavered a bit on going solo for 6 miles or running with Jason around the neighborhood. He was wanting to do an easier 3-miler. I will say, as much as I hate it, running in the neighborhood is what I need to get in some long incline hills - the same hills I'll be running in March for the Little Rock Half Marathon.

So, I opted to run with Jason. We did end up hitting 4 miles. I kind of had a feeling he'd want to go just a little bit farther. Though, we probably went faster than we had meant to run originally.

Like I said, perfect temperatures out. Even got to wear shorts today. The only problem was the annoyingly gusty wind. Cursing wind is absolutely normal right? Right? Even if it's not, I sure do...out loud during runs. Good thing I had a running partner or people out and about would have just thought I was bonkers.

So, another great run with the hubby. It wasn't exactly easy with the slow inclines and the wind, but easy doesn't always mean it was a good run of course. I'm loving having a partner again. While I learned to love my long solo runs, it really can be nice to have some company sometimes as well. Variation is good right?

Burger Night
Tonight, I decided to make things easier on myself in the kitchen as a reward for pulling out a great meal (Korean Tempeh BBQ Tacos) last night. Plus, I got home a little bit later as I met up with a friend for a glass of wine at a local wine bar. She is hosting a New Year's Eve party and I am helping her with the menu. So, we met to finalize the yummies to serve.

We're running low on the fresh veggies department other than some sweet potatoes. So, sweet potatoes mean "fries" and fries mean burgers right? Right. So, I went with a some Black Bean Tofu Burgers that I made up on Sunday and stashed in the freezer. This time I added in some onion and quinoa and some different seasonings, but similar recipe nonetheless.

I think next time I make these I will try sauteing the veggies, maybe adding in some bell peppers as well to see how that changes the flavors and textures. 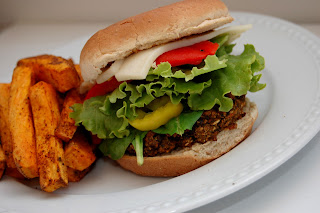 Anyway, Jason started the potatoes baking for me, so then all that had to be done was to heat up the burgers and assemble. My kind of dinner.