By Heather Iacobacci-Miller December 19, 2011
6-Mile Run
Today I was actually able to get in a run outside rather than spin. The skies were slightly overcast, so not a super gorgeous day. However, the temperatures were in the upper 50's. We've got rain in the forecast for tomorrow, so I took advantage of the weather today.

I debated briefly about which direction to start my run. I started into the headwinds, which kept picking up and made it feel a lot cooler than 57 degrees. If the sun had been out, I know it would have been warmer. While I hate headwinds, I'd rather run the first half of my run into them rather than the last half when I'm already tired.

As soon as I made my turn around at mile 3, it felt like the wind completely stopped. I don't know why, but this always surprises me still. You can feel the wind so strongly one way, then not even a hint of a breeze in the other direction. Of course, I immediately got hot and regretted my capri tight option. However, at the end of the run, closer to the river, the breeze picked up from all directions and I was happy with my choice again.

For the most part, it was a really good run for me. I do feel like I was all over the place with speed. At some points I couldn't seem to slow myself down and at other points I felt like there was no way I could pick up the pace and was dragging. But, it was so nice to be outside again today rather than having to be inside for a workout. There's just something about feeling the wind on your face and taking in the scenery around you that helps make the workout better.

Running Question
I do want to bring up a topic that I think about often. It's one Jason has argued with me about as well. So, all you seasoned runners, please speak up and set me straight.

Jason thinks I run my long runs too fast. He is convinced I should back off the speed. I'll readily admit to going much faster on my long runs than recent half marathon training plans suggested. I went at a speed that I felt was comfortable for me though. I didn't feel like I was pushing myself too hard. I mean, it wasn't like a cake walk, but it certainly wasn't like a tempo run.

In my mind, if I want to run fast during a race (or in general) then I need to do just that...run fast. But, I do read Runner's Worlds and training articles. I do know that it is suggested to run long runs slower and have easy recovery runs and then you have a day or two that is set aside for speed. I read this. But I can't grasp this. I have this complete mental block about it.

And I realize that the slower runs are about endurance, about conditioning the body, the lungs, even the mind. I do know where constant pushing leads you - injury zone. Maybe I'm struggling with this so much because I'm frustrated with my drop in speed. Not really sure and am thinking "outloud" at this point.

So, help me out please.

Simple Stir Fry
I'll admit to a bit of over-indulging this weekend by eating out for pizza on Saturday then the veggie burgers with sweet potato fries (fried and not baked like I'd make of course) yesterday. So, feeling on the fluffier side today. Ladies, you know what I'm talking about.

So tonight I really wanted something lighter, healthier, very green. Yesterday, Jason picked up some Napa cabbage and snow peas so that we could make a stir fry this week. Usually I just go with the frozen veggies mix. This was a nice change of ingredients.

I felt like the cabbage deserved a lighter stir fry sauce. I didn't want something really heavy, that would over-power the subtle flavors of the cabbage and the peas. I just sort of made something up based on taste and how much of it I needed, so I apologize for the lack of measurements.

Directions:
In small bowl, mix together the corn starch and water to make a slurry.

In a medium sized bowl, whisk together all ingredients adding in the slurry last to help thicken the sauce. 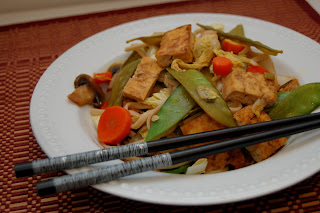 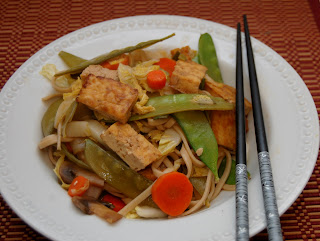 The stir fry was made up of carrots, Napa cabbage, snow peas, button mushrooms, green onions, and tofu that I had dry-seared then tossed with garlic powder, small amount of salt, and soy sauce then baked and cubed.