By Heather Iacobacci-Miller December 20, 2011
Sad Day, But Spin Helped
This morning I felt like I had been run over. I didn't sleep well at all last night. It didn't help that just after midnight lightening hit so hard that I bolted upright then the thunder that immediately followed literally rattled the house. I seriously thought there had been a terrible accident outside and someone hit the house.

The electricity went out briefly and it took a while to calm back down and fall back asleep. Then I was up at 2, 5, and 6. Yawn. At least the storms did stop and it wasn't raining on my walk into the office - just incredibly foggy.

It was sort of a down day for me. Fifteen years ago a dear friend's life was cut short. She was an incredible person, so full of life and love. I won't go into details, you can search her name or see this newscast from today if you really want to know. Juli Busken was a dancer at OU and had just graduated. She was abducted and eventually killed in the early morning hours of December 20, 1996. Thankfully her killer is indeed behind bars on death row.

I try not to dwell on what happened that morning, but rather remember who she was. She really was one-of-a-kind. I am lucky enough to have her parents in my life still. So in a way, I have part of her of course. They are amazing and have always treated me like one of their own. I practically grew up in their house so they didn't have much choice ;-)

So, needless to say, my head wasn't totally in the game during spin today. It felt so much harder than I think it should have. But, I will say, it was a nice escape. Getting in a good sweatfest and being surrounded by others working hard helps change your focus and can give you a nice energy and mood boost when you might need it the most.

Letting Jason Cook
I really wasn't in the mood for cooking this evening. I really wanted something on the lighter side. Jason wanted "comfort" food. His first dish idea was a creamy mushroom pasta that I've made before. That just sounded incredibly heavy to me.

We had kale and butternut squash, so that's what I was sort of thinking (again). I also thought about using portobellos in a bean burger for a true portobello burger. But, I was ready to compromise if it meant I didn't have to cook. I can always revisit the burger later.

We ended up going with Italian "Beef" Sandwiches and baked sweet potato fries. The only difference from this recipe is that we used vegetable stock rather than the reserved liquid from the homemade seitan. 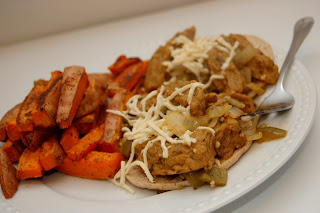 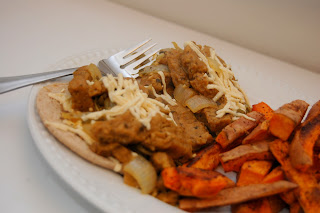 The sandwiches were topped with Daiya Mozzarella, served open-faced, and nice and messy. Definitely a sandwich to eat with a fork. I gave up trying to make them pretty a long time ago.