By Heather Iacobacci-Miller December 05, 2011
Spin on Soggy Monday
Today the rain continued into the early afternoon. Definitely no outdoor running. My plan was to hit up spin class as long as my hamstrings and rear end weren't too sore after yesterday's workout. Not gonna lie, my butt is sore. But(t) I figured spin was still doable.

I kind of had to talk myself into going today. This gray, dreary, cold weather is just not putting any pep in my step. Definitely not making me feel energized to get in a workout at all. Makes me sort of mopey feeling really. Of course, I knew spin would give me an energy boost if I could just get myself there and get going.

I did it, but it wasn't pretty today. Apparently you do actually use your hamstrings during spin. Who knew ;-)

Double Recipe Special
Tonight will be a double recipe kind of post. I wanted to post the recipe for dinner last night (Butternut Squash, Kale Barley) as it turned out so good. I think it'd be a great side dish for a holiday meal. And, because of the protein, it definitely works as a one-dish dinner.

Place butternut squash on baking sheet and drizzle with olive oil then season. Make sure all pieces are coated. Bake for approximately 40-45 minutes tossing once.

Meanwhile, cook wheatberries per package directions in large pot - I simply brought the wheatberries and water to a boil, covered and simmered on medium-low heat for approximately 50 minutes.

In a non-stick skillet, saute onions and garlic for about 3-4 minutes. Add in broth, orange juice, seasonings and kale. Cover and allow the kale to steam until tender. Remove the lid then add in the beans, cranberries, and tempeh and toss well. Allow to continue to simmer on low to allow the liquid to cook off.

Once the squash is done, add that into the skillet with the kale. Once kale is cooked to your liking (I like mine fairly soft), transfer to a large mixing bowl and add in the barley and red wine vinegar and toss well. Re-season if needed. 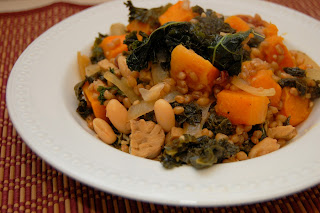 Today's rainy, cold, gray weather just called for soup plain and simple. I had originally though about burritos then maybe an easy stir-fry. But when the wind chills are 32 degrees and the skies look bleak, soup is the only way to go.

I had mentioned to Jason that I had lots of broccoli to use and that I could maybe make a soup. I really mean that I had broccoli for a side with something, totally unsure of, OR I could make some type of soup like a pumpkin soup perhaps.

His response, "Broccoli Cheese soup sounds good." Um. Ok. So, I checked around for some vegan versions. They varied anywhere from just a few ingredients and starting with a roux to lots of ingredients and even using potatoes or jalapenos.

Who knew there were so many types of broccoli cheese soup out there? Anyway, wheels were turning. I knew what I had on hand and the route I wanted to go. I went with my trusty silken tofu method for making a creamy base that adds protein.

Directions:
In large pot, saute onions, carrots, and garlic until onions begin to soften, approximately 5-8 minutes. Add in the broccoli and continue to saute another 5 minutes. Add in the vegetable broth and seasonings. Allow to simmer until the carrots are tender.

Add in the tofu and yeast then remove from heat. Transfer to a blender or food processor in small batches and puree until well blended - you might have some small chunks of broccoli, but the key is to blend in the tofu.

Transfer back to pot and simmer on medium heat until soup thickens, approximately 5 minutes. Add in Daiya and stir until it is well incorporated. Re-season if needed. 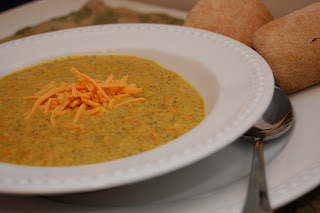 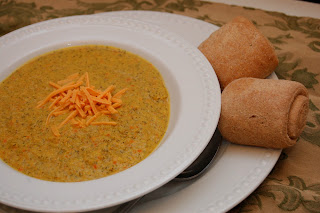 I had Jason take a sample while it was still cooking and he immediately said it was good. I'll admit that I was a bit worried about how it'd really turn out. In the end, this is a winner recipe.

One last thing to mention, I finally got with the program and set up a Where's the Beach Facebook Page.