By Heather Iacobacci-Miller December 27, 2011
Running & Chest
Today it was back to work for me. And it was a rocky start to the day/week. New computer while I was out equals major problems when I get back. Let's just say that the first 5 hours of the morning were spent pretty much without a computer. In the end, back to old computer for now.

The one salvation to the day was that it was sunny and fairly warm - mid-50's. It was, however, super windy. I had originally thought I'd just do some intervals on the treadmill then weights. But Jason asked if I wanted to go run around our neighborhood during lunch.

He knew I was having a rather stressful morning, and thought it'd be good for both of us to be outside in the fresh air (aka gusting winds). Plus, he's sort of playing with the new Garmin he bought me by running with me. Having me push buttons, check speed, distance, etc.

We set out with 4 miles in mind, but ended up over 5 (5.5 after walk around block to cool down). I always forget how sneaky steady inclines can be. Of course, that means I need to practice running hills more I suppose.

It really ended up being a very pleasant run. Definitely mood-boosting after so much dreary weather. Plus, it was nice having company during the run of course.

I did end up going to the gym after work to get in my chest workout. I hadn't really planned on two workouts today actually. But, I'm glad I did go up there. I did about 15 minutes on the elliptical to loosen up my legs, the downfall of a mid-day run, and warm up before doing chest.

While I don't just love the elliptical, it really can be good for just getting your legs going sometimes. Mine were certainly getting tight, so the impromptu workout ended up being smart. As for chest, it was nothing exciting. I have grown to dislike chest workouts though. I need to check out the cables perhaps as an alternative. Anyway, I just did 3x8 for chest flye into chest press supersetted with pushups with toes on bench.

Thai Tuesday
Dinner needed to just be something simple, easy, and veggie heavy tonight. I've done pretty good with my eats over the holidays, other than indulging in a bit too much wine and some sweet treats I normally don't eat.

I wanted something absolutely non-Christmas dinner like. So, I went with a Thai Curry sauce that is super simple, totally not Christmassy, and takes on any and all veggies I might want to add into the mix. Tonight I went with a version of Thai Seitan and Veggies. Normally I try to use fresh veggies like carrots and bell peppers then frozen peas. But, I used up my fresh carrots making veggie burgers. 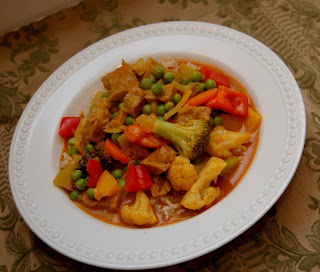 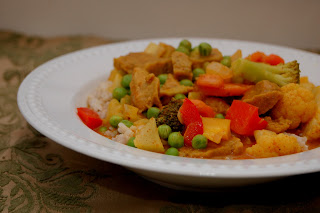 So, I went with the standard broccoli, cauliflower, carrot frozen veggie mix along with some fresh bell peppers and frozen peas. This sauce is so simple really and works well with a variety of veggie and protein combos. Basically: coconut milk, curry paste, agave. You can of course add in additional spices here and there if you want.