By Heather Iacobacci-Miller January 24, 2012
Spin In Lieu of Running
I'm going to try to set up the workout in the most positive manner as I can. Today was sunny and mid-60's. It seems that almost everyone is experiencing some incredible late-January weather. It would have been ideal for a run. In fact, I had my running clothes packed. I was determined to get in a run today.

However, my foot and sciatica are really causing me some serious pain. So much so, that I skipped the run and hit up spin instead. This about killed me (ok, a bit dramatic, but you get the picture). Ideal weather for running in January (so rare) and I can't run? It just doesn't seem very fair at all.

While spin was a great workout, it was not at all what I wanted to be doing. All I could do was stare out the windows and dream of what it feels like to be out there running, and running pain-free.

So, I did something I've been putting off...I made a doctor's appointment for Thursday. While I have an idea what's going on, at this point, I think it's safe to say that nothing I'm doing is helping. We have runner's injury/prevention books spread out everywhere. I've been stretching, rolling, stretching (even at my desk). I massage my foot all throughout the day. And still pain.

Maybe they can at least help me find an adequate physical therapist or physical therapy routine. At this point, I'm just desperate and frustrated. But, enough whining.

Tomorrow and Thursday are supposed to be stormy. While I normally wouldn't be happy about that, I am because it definitely ensures that I won't be pining to run outside ;-)

I Love Kale
Since we had fajitas last night, I didn't go with the Taco Tuesday theme. But it really sounded good. I had some kale and butternut squash on hand, and that sounded really good for the evening. Seriously loving kale.

I decided to just roast the butternut squash and add that to sauteed kale. I knew I needed more protein so I added cannellini beans and then brown rice to complete the protein.

Directions:
Roast your butternut squash and cook your rice (or other grain of choice).

In the meantime, in large skillet, saute the onions, garlic, bell pepper for approximately 3 minutes. Add in the white wine or broth then add in the kale and seasonings. Cover to allow the kale to steam. Cook until the kale is soft (I like mine very well done). As an option, you can add in a drizzle of agave for a sweeter flavor.

Once the kale is done, add in the squash, beans, and barley. Toss and re-season if needed. 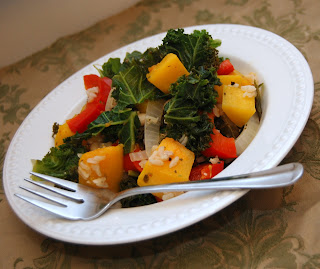 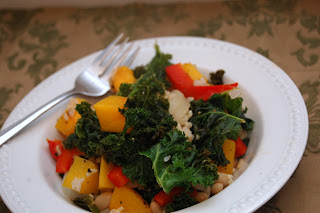 This turned out just OK, a little flat. It was missing a zing - so next time I'll add red wine vinegar or perhaps apple cider vinegar for some acidity. I did sprinkle mine with some nutritional yeast flakes, so that could be added in during the cooking as well.