By Heather Iacobacci-Miller January 11, 2012
Much-Needed Run
While this morning started off just a little cold and drizzly, the sun finally came out and it warmed up to about 60 degrees. After so many crummy days, I was just happy to see sunshine and blue skies again. Jason hadn't exactly been planning on running today as he did his master's swim class this morning.

But I think he was starting to feel the need for sunshine and fresh air as well. So we decided to head out for a 5-miler at lunch around the neighborhood. My half marathon training plan actually had me doing a 6-mile tempo run. But a run with Jason sounded much better. Plus, I really didn't know how far I was going to truly feel like going.

I think we were both a little fatigued (he had a tough swim this morning and my workouts have been 11-mile half marathon training run, leg day, spin, and spin). But, despite the seemingly increased effort level, it was a much-needed run for both of us.

Once I got into a good rhythm, I could just feel stress melting away. Of course, when some jackass honked at us for running at the side of the road, I was ready to throw down. Jason kept me moving forward though.

I wish there was a way to do a massive PSA for drivers and non-runners/cyclists. Runners typically run in the street for a reason. It's almost always safer than running on sidewalks that are lopsided, cracked, broken up and also often have cars parked on them or tail ends of cars blocking them. Ever tripped over a tree root walking? Imagine that happening while running. Also, you're closer to a yard with a dog potentially off leash. Again, bad situation.

I'm not saying runners should all just down the middle of the street mind you, but there is a reason why we run in the road so honking at me is not going to make me happy and you'll get an earful if you stop. Oh, and don't honk at runners or cyclist randomly. Scares the shit out of them and can possibly cause an accident. And yes, cyclist are supposed to ride in the street not the sidewalk (huge issue with that here; people think they should be on sidewalks).

Burrito Wednesday?
I've got this soup I have been itching to make. But the sudden warm temperatures today don't make if feel like soup weather. However, tomorrow is supposed to be really cold and windy, so I'm saving soup night for tomorrow.

Tonight I went with burritos that I baked to crisp up. I simply sauteed onions, garlic, poblano pepper, red bell pepper, garlic and black beans together. I seasoned with chili powder, red pepper, cilantro, cumin, salt, pepper, lime juice. And of course I had to throw in some Daiya Vegan Cheddar into the mix. 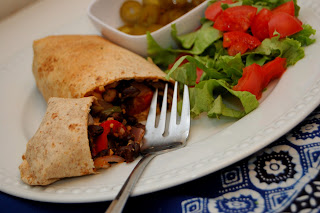 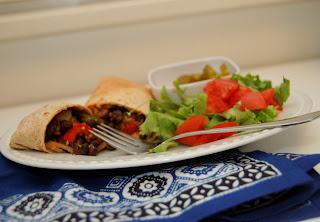 I guess Burrito Wednesday isn't exactly catchy, so we'll call it Wrap It Up Wednesday instead. I served with shredded lettuce, tomatoes and lots of jalapenos (of course). Got to love an easy vegan burrito mid-week.