By Heather Iacobacci-Miller January 09, 2012
Plan B Not Smart Idea
Well, today was one of those days when I should have stuck to Plan A, well, my revised Plan A (Plan A.2), which was to run. Originally I had thought it was going to be raining all day. So, I was going to do a 3-mile treadmill run (my half marathon plan called for 3 easy miles) then back and chest.
The rain, however, was holding off. It was dreary look and chilly, but no rain. So, Jason and I were talking about maybe doing 4 miles at lunch. But, he was feeling less than motivate and my foot has been bothering me, so I decided to go with Plan B to rest my foot. Plan B was spin, usually a good call.
Did you already catch the drift that Plan B was not a good idea? Um, 'cause it wasn't. Got to the gym and there were no towels. Odd for a Monday. It was hot as hell. The TVs were still out and the pass swipe wasn't turned on to get in the doors. Saturday night the power was cut for maintenance in the building so this reset everything apparently. But for it to all still be out meant that no one had been up to the gym yet.
Sometimes you can find towels in the dryer, but there were none to be found anywhere and the gym was getting crowded quickly. Everyone looking for towels especially since it was soooo flipping hot. Red flags started going up, but I was there, I wasn't going to run on the treadmill at this point with no towel.
This is going to sound absolutely nuts, but our spin instructor actually cut up her own towel so some of us could have something to wipe the sweat off with. No, not making this up. And it's the one day I didn't have a towel in my bag because I had taken it out to wash. Go figure right.
Anyway, with a towel smaller than a wash cloth, we got going. Did I mention the air was off? The class itself wasn't terrible, other than being way overheated. Everyone was struggling you could tell. The instructor actually even mentioned cutting it short because it was so miserable. But, we pushed on and got it done.
But the whole time I kept looking out the windows thinking that a run in cold dreary weather actually was suddenly appealing. Missy - if you're reading this, you rock my dear!

Just One of Those Days
The sad thing is, it wasn't just the workout today that was off. My day started with my oatmeal spilling out into my lunch bag if that gives you any indication of things that proceeded from there. Some days just start that way and stay that way somehow. I would say when it rains it pours...but it is indeed pouring LOL.

At least dinner was tasty. I had originally thought I'd make soup tonight, but I needed something simple. This might sound complicated, but it wasn't - I threw together some Wild Rice & Black-eyed Pea Burgers and served with the usual suspects, baked sweet potato fries (sweet potatoes make everything better right??).

I had some black-eyed peas and rice stashed in the freezer from New Year's Day. So I just pulled those out and blended up with carrots and a few additional seasonings. I stirred in 1 flax egg, 1 cup oats ground into flour and 1/2 cup chickpea flour then baked until done. See, simple because I already had the peas and rice done ;-) 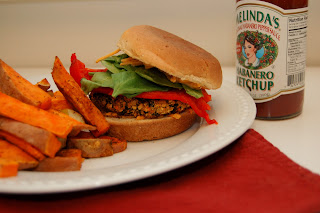 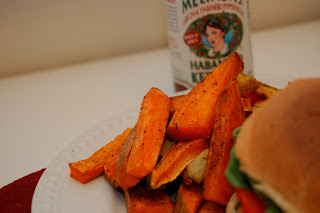 Speaking of having rice done, that reminds me to start some tonight for the soup I want to try out this week. Pre-planning = life saver when it comes to dinner. Now, I just need to remember this more often and save myself a tone of hassle.