By Heather Iacobacci-Miller January 04, 2012
Plan B Run
If I was officially following my half marathon training plan, I would have done 6 miles today with 3 1-mile intervals. However, the idea of going for a 5-mile run with Jason was much more appealing.

I was simply dragging this morning. I thought I slept really well last night, but apparently not. If I had waited to get in my run after work, I'm really not sure I would have made it out for the run to be quite honest.

Luckily, it was sunny out and the temps were in the low 50's. The downfall was that it was incredibly windy once again. What is up with the wind??? We got going with the run and found ourselves running faster than expected. So, I'll call this a tempo + resistance training day. The first half mile was about a 9-minute pace, but then we picked it up and ran between 8:17 and 8:40 up through mile 4. Mile 5 we hit the last long incline and slowed it down using that as the recovery.

I remember telling Jason how hard the run felt today. I guess spin really did a number on my legs yesterday. I really felt like dead weight trying to run. But, I think it was a pretty successful run overall. We chatted, we sucked wind, chatted some more, cursed a little, and then it was done.

I went with chest flyes into chest press as 2x8 then staggered chest press combined with pushups with toes on stability ball as 2x8. Nothing exciting really. But it's done.

BBQ Night
Dinner was mostly based around trying to use up a pre-packaged broccoli slaw I picked up on manager's special. It needed to be used quickly. I really didn't feel like being terribly creative. I momentarily thought about using it in spring rolls or possibly stir fry. Neither sounded really appealing tonight.

Instead I went with a BBQ Tempeh Sandwich. It is similar to my BBQ Portobello & Tempeh Sandwich, only I didn't have any portobellos. I just sauteed white onion with red and green bell peppers and some garlic. Then crumbled in the tempeh and added in BBQ sauce. 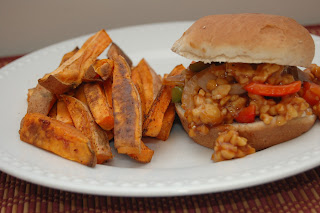 I just topped the burgers with a slaw using the broccoli slaw mix and served with baked sweet potato fries (of course). And do you notice what's missing from the picture??? Yep, forgot to add the slaw when I was taking pics. Oops. We'll blame it on hunger ;-)