By Heather Iacobacci-Miller January 02, 2012
Prosperity Dinner Bowl
Last night I ended up relinguishing kitchen control to Jason. I was so tired after not getting much sleep, and that was setting in big time by 6 pm. I really could have just gone to bed by 7.

I had been thinking about black-eyed peas, Apricot Glazed Brussels Sprouts, wild rice, and roasted sweet potatoes combined in a bowl with some sort of vinaigrette to tie them all together. So that you could just mix it all together.

Jason had other ideas that included using fingerling potatoes. I did tell him my ideas and also told him to just do whatever because I so didn't care at that point. He actually ended up putting together my dish idea for the most part.

He cooked the wild rice with the peas. He did use fingerling potatoes plus sweet potatoes (upon request). I made the glaze for the sprouts and used that as a base for a dressing for the peas. It was simple, but very hearty and satisfying. 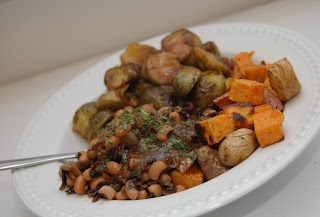 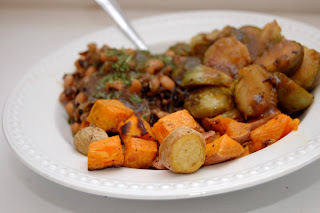 Now, let's hope this brings us the luck and prosperity it's supposed to bring ;-)

Windy Run
This morning Jason got up to go swim. They didn't have the regular master's class at 5:30, but he met a friend at 8:30 as they opened the pool for those who wanted to still get in a workout. He got home around 10:15 and I thought I was just going to hit the treadmill for intervals. It was about 35 degrees with 25mph winds.

But, it was sunny out, and Jason decided that he wanted to get in 4 miles with me after his breakfast. So, I pretty much stayed in PJs until 11:30 this morning. I did at least get several loads of laundry washed, so not a total bum.

While I really don't like cold weather, especially wind, I was excited to wear my new Brooks Infiniti Hybrid Running Shirt. This shirt is flipping awesome for battling cold winds. Now, it won't make the run necessarily easier, but more bearable not having the wind cut into you. It really keeps your chest/core warm but not overly warm. It is definitely still a wicking shirt. Even better, it has the thumb holes I've been wanting in a running shirt. I was super excited and didn't mind one bit that it was cold out. Who am I again???

The wind can really mess with you when you're running. So in between cursing the wind and just trying to not be knocked over, we did a lot of joking and laughing. I guess that's our weird coping method...one we both agree on. I guess it's better to just laugh than to be ticked.

We both had a really good run. Jason even commented that it was a good run. Usually it's just me thinking it was good for me so that means he had a good run too. Even though that's probably not so true.

After the run, we got cleaned up and headed out for a late lunch before hitting up Target (with half of the city apparently). I did at least score a pair of Champion brand running tights on clearance, so that made it more worth the trip and hassle. Then it was back home and back into my jammies and house shoes. Sometimes I feel like such an old lady, or lazy bum.

Dinner? Who knows. The wind is whipping and it's supposed to drop to 23 degrees tonight. So soup or chile might be on tap. If it's something new and interesting, I'll be sure to post tomorrow.