By Heather Iacobacci-Miller January 17, 2012
Spin Again
While today was actually sunny, and surprisingly warm to start (hello 70 degrees), we had a major front moving through bringing in more whipping winds. Yep, another bad hair day around here.

It was one of those days that started off warm, but the temps continued to fall throughout the afternoon. But it was sunny out thank fully. Sun = happy.

In all honesty, I have been itching to run so badly that I seriously contemplated battling the winds today just to get out for a run. In reality, I need to continue to rest my foot even if it is feeling a little better. That doesn't mean I should just take off for a 6-miler. I know this deep down.

Jason said he'd go to spin today, so that actually helped making the right decision a little easier. I did get shoulders done before class. It was a goody; already feeling it actually. I went with a giant set of 3x8. I keep starting with shoulder press, but today I switched it up and I know that's part of why I feel it. That and the giant set itself.

Upright rows
Lateral raise (trying to increase weight so doing 4 at heavier weight, then 4 at one lower)
Front raise

Then it was off to kill the legs...as if they aren't already hating me. Yes, I'm convinced my legs do indeed hate me. That's ok, tough love ;-)

Thai Tuesday
While it should be Taco Tuesday, the fridge is fairly empty. I wasn't exactly sure what I was going to be able to scrounge up even. I had thought about trying to figure out what to put into tacos, I do have some tortillas, but it would have been not much more than beans and some bell peppers I'm afraid. I don't even have canned tomatoes on hand at this point.

I did, however, have some coconut milk, carrots, tofu, frozen spinach and peas, bell peppers, and curry paste. So, how about Thai Tuesday instead?

This was super simple - especially because I had brown rice in the freezer too. I just sauteed the carrots and bell peppers for about 10 minutes or so then added in the coconut milk, tofu, and paste. I let that simmer until the carrots were mostly done then added in the spinach and peas and cooked until peas were heated through. 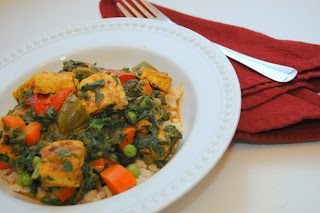 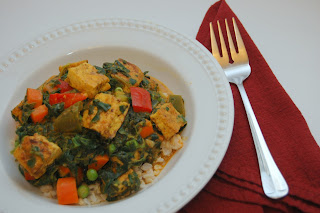 Oh, I did dry-sear the tofu to remove excess water, then I cubed it and sprinkled with garam masala and baked for about 25 minutes flipping once. I like my tofu to be very firm, slightly crisp on the outside.