Working Out to Beat the Blues

By Heather Iacobacci-Miller January 10, 2012
What do you do when you're in a funk? I workout.

When I get into a funk, I try to rely on exercise to help boost my mood. But we all know that when you're kind of down and out, finding the motivation or want-to to exercise can be even harder. It makes me realize how easy it could be to just stop working out and why so many people likely do actually. I keep trying to remind myself that I almost always feel better after the workout though.
I skipped my 3-mile run yesterday, so I'm definitely off my half marathon training plan this week. I kind of thought maybe I'd do the run today on the treadmill then do back and chest. But when it came right down to it, I was NOT going to run even a single mile on the treadmill.

I know it's a big mental block I have, but if I wasn't going to have a damn enjoyable run, then it wasn't going to go down period. And it's raining and cold, so that meant treadmill if I wanted to run. Why is this half marathon training in winter again?
So, I went with spin again today, with much better results than yesterday I should add. The air was actually on and there were towels to sop up my sweaty mess (I know, eeewwww). I was able to get my back workout in before class as well. Because of time, I went with a giant set of 3x8, but had to end up doing double-arm rows instead of barbell rows as planned because the bar was taken.
Wide-grip assisted chin-ups (I did drop the weight by 10#)
Double-arm rows
Pullovers (need to increase weight)
I felt pretty strong today for my back workout. I was happy with the chin-ups progress, but do need to increase the weights for the other exercises).
Spin was pretty good. Definitely helped me take my mind off of things for a solid 45 minutes. And it was a good group today as well - everyone was really there to work hard. I love seeing that.

I really hope I can find some motivation to get back to my half marathon training plan this week. If not, maybe the running break will be good for me.


Giving Up the Kitchen
Being such a rainy, dreary day, soup had sounded good. I had made rice last night to go in a soup actually. I was doing so good trying to pre-plan. But like the run, I had zero desire to stand in the kitchen and make anything.

If Jason hadn't stepped in, I think it would have been cereal perhaps since we don't really even have leftovers as a backup plan. I don't know if it's a man gene or what, but he always wants either potatoes or pasta. Hell, he'd probably mix the two together really. Thankfully, he did not. 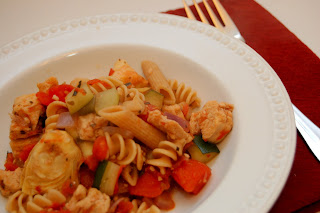 Instead he made a fairly summary pasta and veggie dish using artichokes, zucchini, onions, mushrooms, and tomatoes. But, I didn't have to cook so I was pretty much ok with it to be honest, and he does know what he's doing in the kitchen.

How often do you relinquish complete control in the kitchen? I won't lie, it's not as easy as it sounds ;-)