By Heather Iacobacci-Miller February 28, 2012
Leg Day
Oh man, another sluggish feeling day. Today I'll blame the weather though. We have a major storm front moving in, so it's a gloomy day. Luckily the storms held off until the evening. So, no swimming over to the gym ;-)

Once I got started, I picked up steam pretty quickly. I did about 20 minutes on the elliptical as a warm up before moving on to legs. I went with supersets doing mostly 3x8 unless noted.

After the workout, it was back to work. The only downfall about doing legs midday is the sitting after. I had to remind myself to get up and move around frequently so my legs wouldn't be dead weights. But, at least I had an energy boosting workout to get me through an afternoon meeting.

PT Fun
After work, it was PT again. Not really anything to write home about. She is still trying to work out the heel spur using the Graston Technique. Basically using a metal torture devices to "chisel" at the area. I say chisel, she's not hammering at my heel, but rubbing is a huge understatement and totally not an accurate account of the pain inflected.

She is also continuing to do an acetic acid treatment and then using the kinesio tape to wrap my foot. I did get some sports tape and the directions on how to tape for plantar fasciitis on my own. I will go ahead and tell you, "Don't get the Target brand." It doesn't stick.

Today she also worked on my super tight piriformis. It's been hurting, but not bad enough that it's affecting the sciatic nerve like it was. It was pretty knotted up despite all the rolling I do. She called it, "angry."

Not only do I roll out with my TriggerPoint Therapy kit, I do have a strict stretching routine as well as rolling out the foot on a golf ball, plus some strengthening work (like using toes to pull a towel to me). So, all of this equals relief? Not yet unfortunately. I will have a couple of better days right after PT, but then it's almost like the day I had the blow out from running.

Oh, I did get a "heel seat" from a company called Heel That Pain. It came recommended from another blogger dealing with the same issues. Initially, it does offer a lot of pain relief. The way it is designed, it supports the fascia and helps reduce the pressure on the heel. But, it's not a miracle worker. However, I do highly recommend it, and I recommend their site. It is full of very useful information that includes info on PF, heel spurs, stretching, and even how to tape your foot.

So, slow slow going. I'm not patient either, so I have lots of mini-meltdowns. But I'm really trying my best to not give up.

Chili Weather (sort of)
On a happier note, I went ahead and went for the chili tonight. Chili is also good for stormy nights even if it's warm out. Or that's what I'm going with anyway. I had poblano peppers on their last leg, so I made my Spicy White Chili with Tempeh. 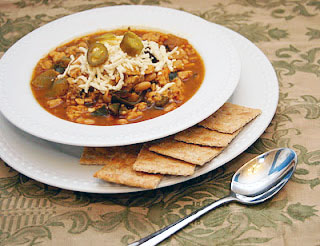 It's really such an easy meal to throw together without much fuss. And it's super filling and comforting. Gotta love that kind of combination.

More happy news? What about enticing you with a giveaway soon? Hint: Food Should Taste Good.