Thank Goodness My Dog Is Cute

By Heather Iacobacci-Miller February 06, 2012
Yawn
Well, last night Jason had the Super Bowl on of course. I really could care less other than knowing football is really and truly over with for the season. I do enjoy catching the Puppy Bowl and occasionally the halftime show.

I did watch the halftime show... I just don't even know what to say about that. I think what was so off-putting was how blatant the lip-syncing was. But, it's just a show I suppose. At least there were no wardrobe malfunctions ;-)

I hit the sack by 9pm and thought I was in for a great night's sleep. Maddie had other plans though. Even downstairs, she can manage to wake us up. She started barking her head off, the "I've gotta to potty right now!" bark. So Jason got up and let her out.

Honestly, I have no idea what time this all started. I think it was around midnights. No less than 30 minutes later, she started up again. This pretty much went on most of the night or morning I should say. 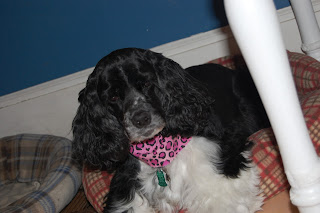 Not a clue what her problem was. Well, she's spoiled that's what it boils down to. She had to poop but wouldn't pee. Then she realize she really had to pee. Then her water wasn't fresh enough. Then she had to potty again. It's a really good thing she's cute! Needless to say, I feel like a zombie today and it's not from some super fantastic Super Bowl party either.

Working Out and Physical Therapy
Let's just say that lack of sleep left me a bit unenthusiastic about working out today. But, I got myself motivated enough for spin. I knew it'd be a good class. I also knew I'd feel tons better after going. It's just that whole getting going thing that was my problem today.

And of course once I got my workout clothes and changed my mindset, I was good to go. Spin isn't a walk in the park kind of workout, but sometimes those tough workouts really are what you need. You have to focus on the workout not anything else. Plus, a lot of laughter ends up happening when everyone is working hard. I think it's some sort of coping mechanism. Have you ever noticed that during a tough class?

I have physical therapy after work, so I won't be getting home until much later than I'm used to. Also, we're having to start the projects we put off over the weekend. So, dinner is going to be leftovers. I know you probably don't believe me as I almost never do leftovers. But today it's out of necessity and I'm going to take advantage of the fact that we do, indeed, have leftovers to use up.

I'm hoping the physical therapist can give me some additional advice for rehabbing my foot. Something more useful than what the doctor gave me.