By Heather Iacobacci-Miller March 27, 2012
3-Mile Run
I won't brag too much about our weather as I know that some of you are actually experiencing real spring, as in it's gotten cold, or rainy, or cold and rainy again. But it was another beautiful day here. Though, I will admit that 80+ degrees in March does feel a bit wrong. I keep waiting for some freak snow storm now.

But, in the meantime, I'll take full advantage of the weather. I won't even complain that it was sweltering for a run at lunch today. I won't have any problem adjusting to running in summer heat at this rate. I'm pretty much already doing it.

We set out around 11:30 for a quick 3-miler. The first thing we were hit with was a wonderful headwind for the first 3/4 mile, which also happens to be a nice long, steady, sneaky incline. Let's just say I wasn't a Chatty Cathy today.

For the most part (other than standing at street corners waiting on cars that took forever to move along) we kept around an 8:30-8:40 pace. There was a time when this was pretty easy. Today, I worked hard for it. I my lungs were on fire, and I felt like I was doing more of a sub-8 not just a sub-9.

But, overall, I felt better than the first few times I tried running after being sidelined. So I know my endurance is coming back. I know that the heat, wind, and allergins also had a role to play in today's tougher run. I will accept that.

Not every run has to be great. Right now I'm thankful that I can run period. Today my heel felt better than it's felt in months. Knock on wood that it's actually on the upswing finally. My piriformis, however, is deciding to be the bigger issue. I guess the injuries have been competing. The heel pain was winning, but now my butt pain is taking over.

Because my piriformis muscle is so inflamed, it is causing my sciatic nerve to be pinched. So I have pain radiating in 2 directions in and around my glute, low back, and upper-most hamstring. Stretching and rolling do help, but they aren't loosening up the area quite like I need.

I have some hip strengthening exercises that the PT has asked me to do daily. She also showed me a couple of deep tissue massage techniques that I am having Jason do now. Hurts like hell, but tends to feel better after.

At this point, however, I am thinking of laying off some of the hamstring/glute exercises I have been doing to try to help the inflammation go away. Then I guess sort of starting from scratch building up strength in those areas.

From all that I've read and heard, most issues with piriformis come from a hamstring and/or glute defeciency. I know that I have always had weaker hams, so I purposely started piling on ham exercises. But I think in doing so, on an already angry muscle, I have just been doing more harm. And it looks like spin is totally out as it seems to aggravate both my piriformis and heel more than running.

Right now I feel like one big old injured mess. But I know that everything is somehow connected and eventually I'll get it all sorted out. I know lots of bloggers (runners and lifters) dealing with injuries right now. How are you getting through a current injury, or how have you dealt with them in the past?


More Grilling
Since it was another nice evening, I decided to grill out again. I had picked up some asparagus on sale the other day, so that needed to be used up pretty quickly.

I decided to grill up some sweet potatoes as well. And for the protein, I went with Quorn cutlets that I grilled in foil packets. I just added in a splash of white wine and some chopped green olives. I know that sounds bizarre, but I had wanted to use capers and was out. I figured the green olives were the closest substitute. I made a simple Lemon Dijon Mustard Sauce to go on top of the Quorn cutlets.

For the sauce, I simply minced red onion and garlic and sauteed until soft then added in some white wine, balsamic vinegar, whole grain mustard, Dijon mustard, salt, pepper, fresh lemon juice, lemon zest, thyme and parsley. I let that simmer and thicken while the food was on the grill. 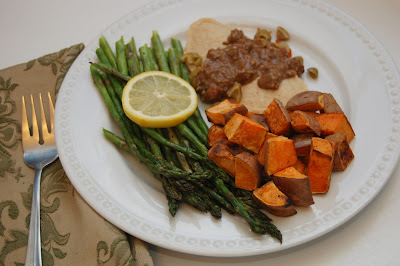 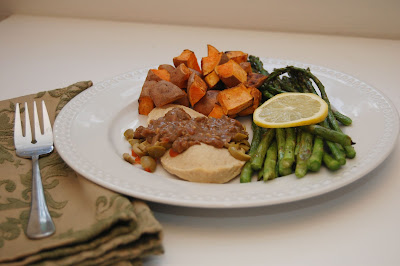 I did sprinkle a dash of a lemon pepper spice blend on the asparagus along with a splash of lemon juice just before serving.