By Heather Iacobacci-Miller March 25, 2012
Super Saturday
Yesterday turned out to be a great day. It was mostly about relaxing and enjoying the great weather really. I did get up and do a few house chores, but mostly...relaxing.

We did get in a good run as well. We drove over to the Two Rivers Bridge to start the run. Jason wanted to run through the "woods" or the prettier part of the trail. I was a-ok with that. If you start from the Big Dam Bridge (usual starting point), it's 2 miles just to the Two Rivers Bridge. Normally, not a big deal. Injured...big deal.

So, we got going with our run. I was just happy as a lark then Jason suddenly stopped. I thought he might have hurt himself or something bad. But he had lost the key to the car. We turned around and headed back the direction we came. Mind you, this was about 5 minutes into the run. Apparently he dropped the key at the very start of the bridge. So, the first .77 miles of the run was a bit chaotic. But, we found the key.

After all of that, we got back to the real run. Just chugging along, except I had to pee really really bad. There are no potties at the Two Rivers Bridge. I am a creature of extreme habit and always pee before I start a run. Period. Thankfully, I knew that 2 miles down the line there were some really nice bathrooms waiting for me. So let's just say this was a lot of stopping and starting type of run. No worries and no stressing out though. Seriously, I was just happy to be out there.

I hit an amazing stride around mile 3-4. I seriously had no heel pain for that mile. It felt absolutely amazing. I picked up my speed and sort of left Jason for a bit. He was struggling some because of allergies. I wasn't intending on leaving him for the rest of the run. But for that moment, I had to go. Just go.

For the first time since January, it felt like everything was clicking perfectly. No feeling of a loss of endurance, almost no pain, legs just took over and carried me along. Can we say just a teeny tiny bit of runner's high happening? Oh how I have missed missed missed that feeling. I probably could have cried I was so happy in that very moment.

In total, I did 5.6 miles. It was mostly pain free during the run, and finally my endurance for running felt back on track. However, after the run, I did pay a little bit. My heel is definitely more tender today. Lots of icing, stretching, rolling. And maybe only a runner can get it - but it's worth the pain. Smart? Probably not. But for sanity's sake, it was needed.

Do you ever do things you know you shouldn't do but feel that you must?

After the run, we got cleaned up and decided it was too nice to be inside. We had a late lunch at one of our favorite haunts - Dugan's, mostly because they have nice outdoor seating. When we got home...we continued the outdoor theme and relaxed on the patio for several hours. It was definitely an ideal day.


Sunny Sunday
This morning I would have just about given up anything asked of me to be able to run again. But, my heel was definitely tender, and I knew it wasn't smart. So we hit the gym instead. It can kind of be depressing having to take your workout indoors when you just want to be outside. At least my gym does have amazing views.

I went with biceps and triceps today. I started with 20 minutes on the elliptical then went with supersets of 3x8. I did increase the weights for alternating curls - new PR for weight. I did as many reps as I could at the higher weight then decreased for the remaining. I can now officially say I can curl 25's (dumbbells).

Definitely happy with the workout, especially finally being able to break the 20# dumbbells mark for curls. I know it's still not "that" much for some lifters, but man it made this girl happy ;-)

After the gym we did have to hit the grocery store. Then it was onto some much-needed yard work. I got a significant amount of weeding accomplished and cleared out the garden. Jason took care of the mowing. The dogs supervised.

I absolutely love this time of year when the first splashes of colors are in full bloom. The roses are really starting to take off now, which always makes me smile. Roses are my absolute favorite flower. We have 8 rose bushes if that tells you anything. And each one has it's own special color, fragrance, and even sentiment. 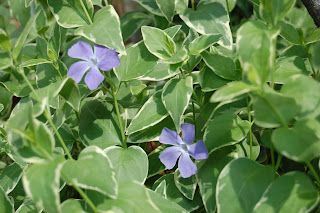 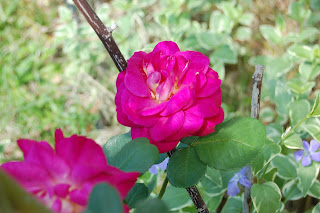 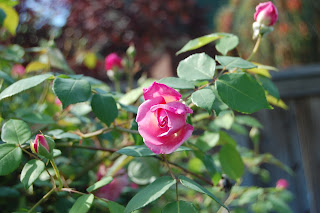 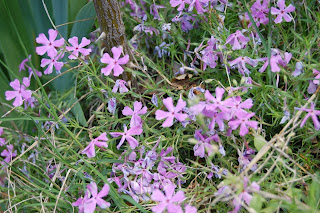 Tonight we'll definitely be grilling out. But, for now, I'm going to enjoy the rest of this gorgeous Sunday relaxing. I may or may not have a glass (or two) of wine as well.