By Heather Iacobacci-Miller March 18, 2012
Saturday Re-Cap
This weekend has been really good. Jason and I started Saturday off with a 4-mile run. It was mostly good. Definitely felt more like my old running self. It started sprinkling too, which was sort of fun - and it felt good considering it was already in the 70's and rather humid.

My sister got here around 11:15, so lots of sister time this weekend. We started off the day going shopping. We hit up DSW (big fail, no deals) and Charming Charlie. I found a couple of bracelets and Sarah found several tops and accessories.

We were getting pretty hungry, so we thought we'd try to hit up Dugan's. However, being St. Patty's Day (Dugan's is an Irish pub)and a parade going on, eating there wasn't going to happen. It was standing room only, and even that was iffy. We ended up at another place nearby called Dizzy's Gypsy Bistro. They had outdoor seating which was a big score, but terribly slow service. Of course, we were hungry so even minimally slow felt drastic.

Once we got food down (and some wine), we were back in action and ready to meet up with some friends. Everything downtown was just jam packed. We ended up having to wait 15 minutes just to get a seat at a place called Sticky Fingerz. 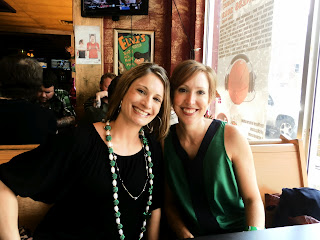 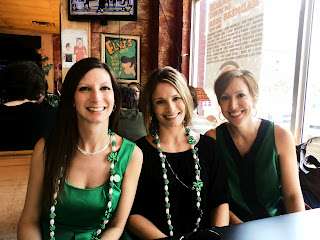 I guess every place was just so packed and maybe slightly understaffed for the events happening because service was rather poor. We got one round of drinks and pretty much never saw the server again. Kind of took that as a sign to head home.

Our friends went and picked up their dog and brought the party to the house. It was such nice weather that we all sat outside and just relaxed until the sun went down.

Sunday
Today I was up a lot earlier than I had hoped, 7 am. But that meant hitting the gym earlier rather than later at least. Sarah was happy to get to hit the gym with me as we have some equipment that her gym doesn't have (like the assisted pullup machine).

After the gym, we cleaned up and went for a second round of workouts - shopping cardio. She had some things to exchange and then we did some real shopping. I kind of struck out, but she was the lucky one and walked away with several new outfits for pretty good prices. At least one of us was a winner ;-)

We decided to have lunch at a place called Pizza Cafe. They not only have a great outdoor patio area, but they have gluten free pizza crusts. So Sarah definitely wanted to try that out. It might not have been the best crust in the world (not that it was bad mind you), but she's just so grateful that more and more restaurants are offering GF options - especially pizza joints.

And now it's Sunday afternoon, the weekend is rapidly winding down. I'm thinking we might end up having a grilled veggie salad for dinner. It just feels like grilling weather. Plus, grilling seems to be rather relaxing, so it's perfect for a Sunday evening.