By Heather Iacobacci-Miller March 28, 2012
Weight Day
I won't lie and say I was just super excited about hitting the gym today. But I did it, and I felt better after. Sometimes you gotta just get moving and tell your brain to be quiet for a bit. It was sunny out, and the thought of being in a steamy gym was not exactly appealing.

Gyms on the 29th floor, with all windows are a good idea in theory. Heat rises and the windows seem to just draw in the radiant heat. At least when it's that warm outside, you have a breeze.

Anyway, I got my rear in gear and started with 20 minutes on the elliptical before moving on to back and shoulders. I went with 3 sets of 8 reps done as supersets unless noted. For some exercises I am trying to increase my weights so I have been doing as many reps as possible with the heavier weight then dropping down for the remainder of the reps. It seems to be helping me push past some plateaus.

I did some ab work as well.

Grilling for Wok Wednesday ?
Tonight is one of those strange concoction dinners. I had originally thought of going with my recent Wok Wednesday theme. I had bok choy to use up, so that helped me make the decision. But, then we have this nice weather...grilling weather.

Jason suggest grilling the bok choy. I wasn't opposed, but didn't have any other ideas of what to put together to make it a meal. I had tossed around the crazy idea of a grilled "stir fry" just using everything that I would have used in a regular stir fry. But I thought that was probably a little out there.

But maybe not. Either that or Jason is just as nuts as I am. He started off suggesting a Chinese BBQ. Ok, whatever that means. Then he said something about a deconstructed stir fry. Ok. Totally on the same wave length apparently. Obviously we were meant for each other ;-)

I dry-seared the tofu then let that marinate for a bit. I pulled it out of the sauce and tossed all my stir fry ingredients in the sauce (bok choy, carrots, broccoli, mushrooms). I put my veggies on a grilling tray/basket.

I started my grill and went back in to let it heat up. When I took out my veggies and opened the grill...no heat. Big fail - propane tank pooped out.

Oh well, maybe next time. So, in the end, it was a regular Wok Wednesday only with a huge mess created beforehand. 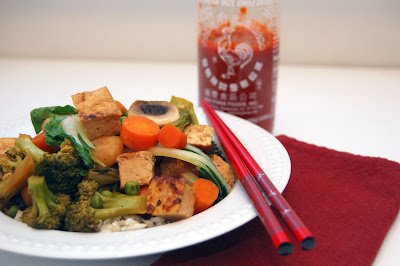