By Heather Iacobacci-Miller April 06, 2012
We'll just say that this sweet boy helped me write this post. 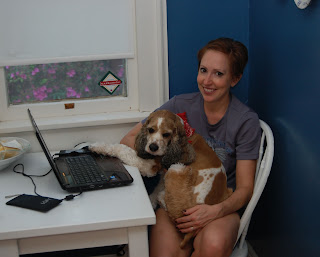 Today we will be spending the majority of our day waiting around for Heath (planning to spend the time at Mount Nebo to do some hiking with Maddie - will let you know how that one goes over).

Heath is having eye surgery to hopefully correct his cataracts, which have gotten significantly worse over the past 6 months. I know I don't talk about my crazy furbabies often enough. So, I thought today I'd share a bit about them for my Fun Facts Friday.

I am a firm believer in rescuing. You might not know their history, you might have to deal with kidney failure, cataracts, or other ailments. But the love you receive in return is so worth it in my opinion.

So, this post is dedicated to all the rescues and all those waiting to be rescued.