By Heather Iacobacci-Miller April 26, 2012
Hot Hot Hot
Today I had a 3.5 mile run planned. I thought Jason was going to go with me, but he had a meeting. So I decided to head out early for my break and get it done as the temps were going up quickly.

I started my run just after 10:30 and it was right at 80 degrees already with high humidity. It started off overcast, which I was thankful about, but then the clouds burned off (of course).

Since I was running solo, around the neighborhood, I decided to stick to more populated streets. I set off in the direction of the arts center and park. It was mostly shaded with a slight breeze. I was settling into a nice groove, or so I thought.

The start of mile 2 is where it started to get hard. I was going up a long, gradual incline, with no shade, and headwinds. It actually made me feel nauseous to be honest.

Once I crested and the road leveled out, I turned a corner and the headwinds subsided, but no shade to be found for about half a mile. I ended up finishing the run on a typical route that is mostly shady, but with one more long, slow, gradual incline. You know, the kind that never ever seem to end. And it was into the headwinds again (lucky me).

I did have to walk for several seconds at 2.25 miles into the run. My heart rate was out of control and so was my breathing. I just needed to sort of calm down, cool down, catch my breath then I continued on. So, it wasn't the fun run I was hoping for, but it wasn't the worst either. Just tough.

In the end, I managed 3.86 miles. And I won't lie, it was hard for my crazy brain to be ok with not rounding out to an even 4. But I just had to stop.
One hot mess! #PROOF

Fajitas Thursday
I decided to go with fajitas for dinner tonight. We had some yellow squash that needed to be used fairly quickly. Fajitas are always an easy dinner to toss together too.

I just sauteed seitan, red onion, green and red bell peppers with some garlic. After those began to soften, I added in squash and zucchini along with red chili powder, cumin, cilantro, salt, pepper, red pepper, and lemon juice. 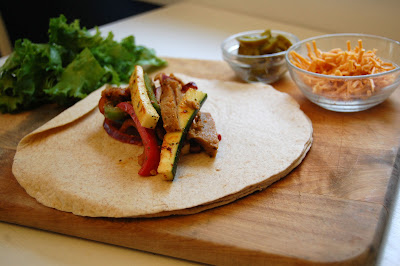 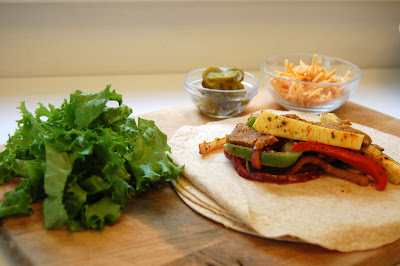 I served with Daiya Vegan Cheese, jalapenos, and lettuce. So Fajita Thursday doesn't exactly have a great ring to it, but it tasted good nonetheless!