By Heather Iacobacci-Miller April 02, 2012
Lunch Date Trumps Gym
Today I did something totally different - I went off my normal schedule. Something I should do more often. Rather than getting in my workout at lunch, I met a friend for lunch. We hadn't seen each other in a while, so it was long over due.

We met at a nice place just down the street from our respective offices called Lulav. It's definitely one of those places you think of when you want a fancy dinner. But, their lunches are actually very reasonably priced - and good.

So, we had a nice visit over our meal. It was great catching up, and just taking time to enjoy some time during the day. I think it's easy to get caught up in disliking Mondays that it's easy to overlook opportunities to make it enjoyable.

The only downfall was that it was so nice out it made it that much harder to get back to the office.

Gym Time
I guess the other downfall of missing the noon workout would be my general workout motivation - or lack thereof. When I workout after work, I have a lot more time to try to talk myself out of it, especially if I'm not super excited about it anyway.

I would honestly have preferred to try to get in another run today as the weather was nice and we've got rain in the forecast for the next two days. But I also know that another run (it would have made for 3 days in a row) was absolutely the worst idea.

While my heel is doing so much better, my piriformis is not and another run would simply aggravate it that much more. And, I think it could potentially cause my heel to hurt as well. So, gym it was.

Not really an exciting workout. I just got in there, got it done. Today was biceps and triceps. Supersets of 3x8:

The workout ended up being a good one in terms of feeling strong. I was able to hit 6 reps on the first set of alternating curls with 25# dumbells so that made me feel particularly good. I did have to totally change my plan as the weight area was packed, and I couldn't even get a bench. But it was nice watching the looks of the guys faces as they were checking out the weights I was using ;-)

However, I need to stop being lazy, and shake up my workouts a bit. I keep sticking to the 3 sets of 8 reps as supersets. Part of it is because I like supersets for getting through a workout quickly. Also, I prefer the 8-rep range over 10 and higher.

But, I think I could at least play around with the timing - like 1 up and 2 sloooooowwww down for curls then 2 slow up and 1 down (talking in terms of rep pattern).

Mexican Monday
Tonight we ended up going with Mexican Monday by making fajitas (ok it's really more like Tex-Mex Monday). I didn't go to the grocery store this weekend, so we are getting low on veggies. Jason made a quick stop by the store to pick up squash and zucchini for tonight and sweet potatoes for tomorrow.

For the fajitas, I just sauteed red onions, 3 colors of bell peppers, and garlic until they began to soften. I added in seitan, squash, zucchini, fresh jalapeno and spiced up with lemon juice, cumin, salt, pepper, and fresh cilantro. 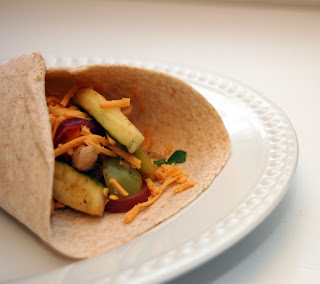 And fajitas are impossible to photograph unless you have a nice set up to display them, or extra time. I, however, was starving and lazy. But I assure you, they tasted great - especially topped with Daiya Vegan Cheese. Seriously addicting stuff.