By Heather Iacobacci-Miller April 12, 2012
A New Route
Another cooler, but sunny day for us. This morning it was 48 degrees, a far cry from our lows of 60. When Jason and I set out for our lunchtime run, I had on a short sleeved top and shorts. I had to talk myself out of capris or sleeves because I knew I'd warm up. It was right at 60 with a cool breeze, but lots of sunshine.

The minute we started moving I mentioned that I was cold. Jason agreed. I had mapped out a different route, well, part of it I mapped. Just wanted some different scenery. For the most part, it was a pretty good route. Some gradual inclines, but definitely new views.

I should have mapped the whole thing though. I had planned to head straight down one street and take a right onto 23rd. I saw 22nd then realized there was a 23rd on the left, but not the right. Ok, so we get to 24th and take a right but it dead ended so we had to take the next right and I thought we'd just take a left at 23rd....still no 23rd. So we were forced to hit 22nd. Oh 22nd street you hate me....one, long, big, hill with another hill at the top of the big, long hill.

I felt like I had my butt kicked and handed to me on a platter by the time we made it to the top. I was huffing, puffing, and kind of ticked at my endurance. I mentioned something about that and Jason said that was mostly power. Ok, thank you, so my power is what sucks. Either way...I was winded.

We kept going and I was still huffing and puffing. Then I realized we were at an 8:20 pace. Well, at least I had a very valid reason for feeling like I was working so darn hard. We slowed the pace some so we could both recoup. Once again, having that darn Garmin can pay off - it helped me realize I was pushing harder than I needed. Otherwise, I think I would have just kept pushing on until I just couldn't go any longer.

New Workout
I did hit the gym after work to get in a leg workout. I went with a circuit style - something I haven't done in eons. Don't feel like it was the best workout in the world, but I got it done. I am worried about lifting right now with all of my piriformis pain. My PT thinks I need to keep up with my leg weights along with all the other exercises.

For the circuit, I did each each exercise with no rest between for 8 reps (unless noted) and repeated for 3 rounds total.

I did some abs after the workout and then went home to stretch and roll out. I may feel this more than I think tomorrow.

Rather than bore you with the details of dinner, I wanted to talk about Heath. So many of you have sent well-wishes and virtual hugs to the Heath Man. 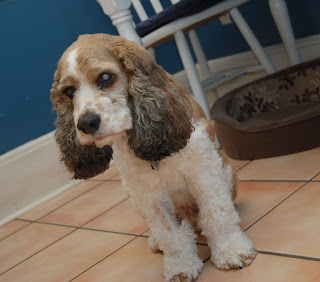 I have to thank Danielle at Long May You Run for sending me a link to a site with some fantastic information about living with a blind dong. She has a furbaby that is almost blind as well.

I have ordered a book and a new toy (makes lots of noise). I have definitely been doing a lot of research on how to keep him active and happy. Definitely feeling a little more positive than I was after we heard the news last week.

But, I won't lie, it still makes me very sad for the guy. I feel like I failed somehow, but I know that's not really true. His blindness is genetic plain and simple. And he's adjusted so well that we had no idea he was blind. Sneaky little man!

But from what I've read, they say that for dogs, sight is 3rd on the list of senses they use. We just have to learn how to be patient, teach some new commands, and specialize his toys. In the meantime, he continues to get tons of snuggle time.