And you know what? This was a great workout once I got my rear in gear. I was really still ho-hum during my warmup, but once I got going with the weights, I felt really good, strong. And it was nice having just a little bit of a change in the routine. 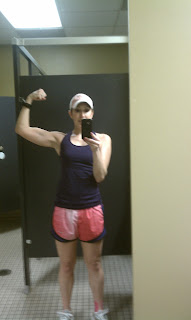 So, here's my pumped up #PROOF that sometimes you just have to get yourself moving. Even I have very uninspired days ;-)

(And I will say that I hope my posting this doesn't come off as vain. I really am not all the comfortable posting pics like this, which is why they are rare.)

Tex-Mex Monday
Yesterday, when I went to the store, I randomly picked up some poblano peppers. Jason and I both really like them. I haven't done stuffed poblano peppers in ages, so I thought it'd be a nice change of pace for tonight.

I had originally planned on grilling, but it was raining. I will blame that on the fact that I actually washed my car yesterday.

Remove the cap of the poblano pepper (reserve any usable piece and add to the onions and peppers if you wish). Then, cut a slit into the poblano peppers and remove ribs and seeds. Place in glass dish with lid and bake for approximately 20 minutes.

In the meantime, cook the quinoa per package directions.

In a large skillet, saute onions, garlic, peppers until begin to soften. Add in the corn and cooked quinoa, and season to your preferred tastes. (I like spicy.)

Stuff the peppers with the mixture then top with Daiya Vegan Cheese. Cover and bake until the Daiya is fully melted and peppers are soft, approximately 20 minutes.

Rather than adding black beans into the filling, I decided to make beans to serve on the side. All I did was rinse and drain one can of black beans.

I sauteed some diced red onions with garlic then added in the beans, diced green chiles, and seasonings like salt, pepper, cumin, chili powder, and red pepper. When the  beans were nice and soft, I removed from heat and sprinkled with diced green onions and some diced cherry tomatoes. 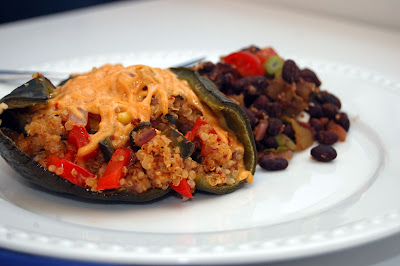 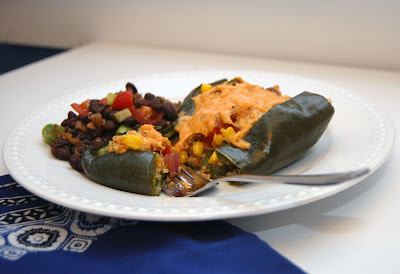 Definitely happy with how this turned out. I was also really pleased with the beans. They would make for a great taco or burrito filling.