By Heather Iacobacci-Miller April 01, 2012
Six-Mile Saturday
I must say, I have really been enjoying disconnecting on Saturdays and focusing on enjoying the day at hand and not blogging. I hope you don't mind longer Sunday recap posts. I think most people tend to be busy and aren't really reading blogs on the weekend as much anyway - which I think is a great thing actually.

It seems like we've been pretty busy most weekends, or at least on Saturdays. No complaints though. Yesterday started off with a 6-mile run with Jason. We did get started later than we should have so it was already pretty hot and steamy. The sun was definitely out in full force. I actually prayed for a cloud to just momentarily block the sun, or perhaps a breeze would have been nice.

The route we took put us in full sun with very little shade. But man when we saw a shady spot, we definitely slowed down to enjoy. The run was really good for me mentally. I didn't overthink, I just ran and enjoyed every minute.

Definitely the best run I have had since my injuries. We stopped at 6 miles, but I had that feeling that I wanted to run another mile. But, I did myself a favor and didn't push it. Like Jason said, "That means you stopped just in time." 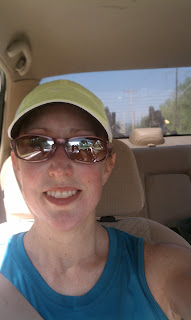 Here's my #PROOF. Thankfully the sweat had started to dry into a nice salty crust at this point so I'm not as disgusting as I had looked. We forgot to bring sweat towels to use to dry off. Oops.

Sister Time
After the run, we were kind of rushed to get ready. We were supposed to be in our home town (an hour away) around 11:30. We didn't leave our house until about 10:45 and had to stop and get gas. Kind of late. But it all worked out.

The plan was that we were picking up my sister and meeting 2 other people at the race track, and Jason was going to fish with his dad. Sarah's friends ended up having to back out so it was just the 2 of us until another friend showed up a few hours later. 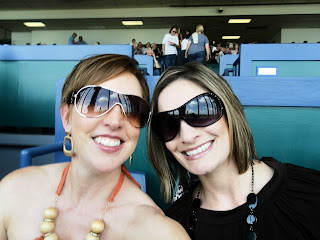 But trust me, we had plenty of fun and laughs just the 2 of us. Let's just say it felt like I had gotten in a nice ab workout from laughing so hard. The day was simply beautiful. Oh, and I actually got carded buying a drink. When you're thirty-XXXXXcough cough, (let's say late 30's) it makes you want to kiss the person who asked to see your ID.

We didn't get back home until around 6, so it was a long day. We ended up making pizza and just sitting on the couch watching a movie - one that I had accidentally doubled up on Netflix so we had seen. But that's ok. I was in bed a little after 10 and slept soundly.

Sunday
This morning we got up and went for an easy 3-mile run. I honestly would have taken a rest day over going to the gym. I was a little nervous about running again. I haven't run two days in a row in many many months now. But I think it was good for me actually. Got my legs moving, loosened up.

I got back to the house and had planned on doing biceps/triceps in my little gym room while Jason rode his bike. But I just couldn't stand the thought of lifting today. Just wasn't in the mood at all. So I decided to do a little kickboxing for fun. I love Cathe Friedrich's MMA Kickboxing. If I omit the leg drills sections, then it's low-impact. Plus, it's fun to punch and kick sometimes.

I spent some time stretching and rolling out, then decided to wash my car. It was in desperate need. But I always forget what a chore car washing really ends up being until I get started. Oh well, now I suppose it can rain. That's typically how it works right?

It's gorgeous outside, so I imagine whatever else we do today it will involve sitting outside. I hope you all are enjoying your Sunday!