By Heather Iacobacci-Miller May 03, 2012
2 on Thursday - Running & Legs
This morning the alarm went off terribly early (5:15). Part of me wanted to reset the alarm and just run later. But, we got out of bed and got ready in a fog of early morning sleepiness. Maybe it's for the best that way. Not awake enough to even balk at the idea of running at that hour.

I am glad we got it done. It was already a very muggy 70 degrees at 5:40 am. Today I did have a harder time settling into a pace than I did on Tuesday. My legs felt pretty heavy, but that usually happens by Thursday.

So it makes sense that our splits were all over the place. The first one was 9:48, then 9:08, then an 8:58 (which is nuts because that one included a no-joke hill) then slowed back to a 9:16. Talk about inconsistent.

We sort of meandered a little off our usual route, this is how we came upon an unexpected hill...or three. And it's not the kind of hills you just power up quickly. Nope, these are those sneaky long inclines that never seem to end. You find yourself getting more and more winded and can't figure it out, then you start to pay attention and realize you're on a never-ending incline.

Somehow, that's where we actually ended up pushing harder and got our fastest split. Funny how that can happen like that. At least in the early morning hours you don't have to spend much time stopping and waiting on traffic so you don't have that "oh crap I can't get moving again" feeling.

So, another early-morning run in the books - 4 miles. No land speed records set, but a good run just the same.

During lunch, I went ahead and did my leg workout at the house. I really didn't feel like lugging my gym bag with me or messing with fighting for a squat rack. Plus, I thought it might do me some good to do something totally different - a DVD.

I ended up going with an oldie but goodie for legs and abs: Cathe's Power Hour DVD.

It's definitely a higher rep workout, but not in the terms of doing something 3x12 or 3x16. It's more about changing up the rep patterns so you might do 16 regular squats then straight into a 2:2 count or 1 down 3 up or low-end pulses. My legs were on fire!

I did add in 3 sets of 10 reps of single-leg deadlifts, 3 sets of 12 reps single leg calf raises with dumbbell held in same hand as the calf I was working and 2 sets of 16 reps of weighted donkey kicks for the booty.

So while I didn't squat super heavy (squatted about 45 lb lower), I'm feeling it.

More Grilling
I really didn't want to fuss with dinner tonight to be honest. We definitely have veggies and such to use up though. I thought about a grilled veggie sandwich, but Jason wanted a portobello sans the squashes.

I ended up making an easy Sundried Tomato Hummus to use as a spread for the sandwiches. I grilled portobellos that I had marinated in balsamic vinaigrette. I just used jarred roasted red bell peppers, mostly because I was being lazy and fresh spinach for this sandwich. No frills, which probably made it less messy too. 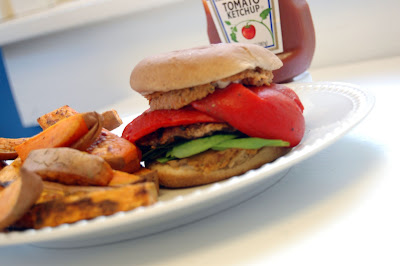 Being a sandwich, this called for sweet potato "fries" on the side of course - which I also grilled. Tomorrow I am officially off kitchen duty!

Don't forget to enter my NuNaturals Stevia Giveaway! You have until midnight May 3 (tonight). I will announced the winners tomorrow!