By Heather Iacobacci-Miller May 15, 2012
More Running
Last night I set the alarm clock for 5:19 so we could get up for a morning run. I won't lie, part of me wanted to change the time when I woke up for the 4th time at 3:45. But, I'm glad I didn't reset it. While it wasn't easy getting going this morning, it was worth it.

It was only 61 degrees when we started our run. There was a steady breeze so it was chilly at the start. Of course that change within 5 minutes. It always does. For the first 3/4 of a mile we didn't say a word. I don't know why we take this particular route, it's nothing but a long, steady incline. Actually, pretty much any direction we start out puts us hitting an incline early on. So I guess it's best to just suck it up and get it done.

We hit the first mile at a 9:14 pace. Not too bad for just waking up. I commented on how light it already seemed. Funny how it's so gradual that it sort of sneaks up on you. The good thing about early-morning runs is that there is very little traffic, so a lot less time spent standing waiting for cars to pass.

Mile 2 was a 9:09 pace. We were starting to wake up I believe. This put us right at our house. Jason had to take a quick break, I got water, and we were off again. And of course it meant another incline. Brilliant. Mile 3 was 8:58.

We took a few different streets, which put us on several hills we hadn't expected. And I don't know what happened, but we really kicked up the speed. Despite the hills, mile 4 was 8:38. Apparently we speed up for hills. Why? Maybe it was simply too early to be rational.

We ended up going through a park path during mile 5 so that slowed us down a bit, but not much. I think we were both starting to get a bit competitive with the time at that point. A little impromptu speed work I suppose. Mile 5 was 8:43. Phew. Now that's how you start the day!

More Grilling
The great thing about getting my workout done early, is that I leave work at my normal time and have a free evening to get things done.

One thing I needed to do was make up some veggie burgers to freeze (and I'll take them with us on vacation too). I did use the oven for the burgers, but went with the grill for dinner.

Originally, I had planned on a Grilled Kale and Veggie Salad. But I had some asparagus that needed to be used up first. Yes, I could have put that on the salad of course, but do need to save veggies for the rest of the week. 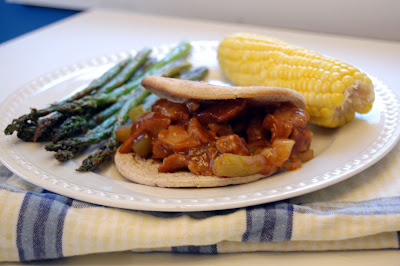 So, tonight it was grilled corn on the cob and grilled asparagus with BBQ Seitan Sandwiches. Very summer-like dinner in my mind. And pretty simple to throw together too.