By Heather Iacobacci-Miller May 10, 2012
Running
Originally, Jason and I had planned on running early this morning. But, we did have quite a cool down (so it wasn't as necessary to get out before the sun came up) and Jason has been up to either swim or run all week and was wanting to sleep in a bit.

I was kind of disappointed at first, but when I didn't sleep well last night, I was really happy we put the run off until lunchtime. Sometimes things work out right don't they?

We set out for the run just after 11:30. It was sunny, clear skies, 72 degrees but almost no humidity (or at least no humidity for here). There was a nice breeze, so it really didn't feel terribly warm. We headed towards the arts center where there is a park we have been running through more frequently. It's just nice to take a different route, see some different scenery.

The goal was 4 miles with no particular pace in mind. In fact, I never looked at the lap times until the last mile. I know we were speeding up. We both sort of sprinted out the last 2 tenths and ended mile 4 at an 8:29 pace. I love it when we finish strong like that. We might not have been doing that pace for the other 3 miles, but to finish fast always makes me feel good.

Lifting
After work, I did my leg workout at home again. I went with the same Cathe Friedrich DVD as last week - Power Hour. I will admit that at one point I told Jason I'd much rather do Happy Hour rather than Power Hour ;-)

This workout is basically squats, plie squats, and lunges - basic but effective because of the variety of rep patterns. So, I added on calf raises, single-leg deadlifts, and weighted donkey kicks as well.

Since I've been neglecting chest workouts, I went ahead and tossed that in as well. I mean, why not right? I kept it simple and did 3 sets of 10 reps of chest flye into chest press then finished with 21's (7 high end, 7 low end, 7 full presses).

I stretched for a bit then got cleaned up. I wasn't really feeling it until I took a step down the stairs. Thank goodness for railings! And then I went to paint my nails and my hands were all shaky from chest. Ahhhhh good feelings!

Since I haven't been to the grocery store this week, dinner called for more creativity than I was willing to give. I told Jason that we had squash, zucchini, and bell peppers.

I half figured he'd want some pasta dish perhaps. I just wanted easy. Instead he decides we should stuff the squash and zucchini with a lentil concoction with a red bell pepper sauce. Um. Sure. My response was that if that's what he wanted, that's what he could make.

My hand in dinner was getting the lentils and the quinoa started. I let him do the rest. Basically he just diced up then sauteed onion, red and green bell peppers, a carrot with garlic and spices. He mixed in the lentils and quinoa then sprinkled with Daiya Vegan Cheese and baked until the squash was soft. 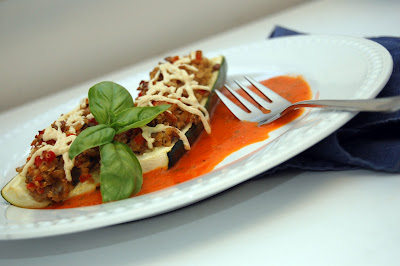 So how was it? Fantastic of course. I'm definitely lucky to have a man that cook, likes to cook, and is good at cooking.